Children can nestle into yellow alcoves and pull wooden furniture out of the walls at this school in Madrid by Rica Studio, which uses play to teach the English language.

The centre uses the Reggio Emilia approach to teaching children a foreign language, a method that combines self-guided play, visual learning and the built environment.

Rather than using thin partitions to line the hallway that runs through the centre of the school with classrooms on either side, the architects designed thick inhabitable walls.

A folded steel plate painted yellow provides the structure for the wall. It outlines large nooks with glass barriers that children can clamber into and peer into the classrooms.

Modular trays made of light beech wood that slot above and below the framework are used for storing and exhibiting the children's work, like a cabinet of curiosities, and are open to both the classroom and the corridor.

Photographer and filmmaker Miguel de Guzmán created a movie of the project, using stop and start motion to highlight these features. It captures children playing ball games between openings in the walls and riding scooters along the corridor.

"The goal was to create a space in the spirit of the adventure playgrounds where the play-objects, not toys, only develop their full potential in the interaction with the kids," said the architects.

"The answer was to propose a tinker tray, where all the objects involved in the play and learning process could be stored, the work produced exhibited, and where the kids could also feel that they are part of it," they added.

The architects also established a generic module for the furniture so that chairs, tables and cabinets also slot into the wall when not in use, making rearranging the classroom layout easier.

On the ground floor, two large classrooms are set on either sides of the entrance hall and stairwell.

Yellow panelling covers the back walls of the classrooms, housing the sinks and toilets, while curtains can be used to temporarily partition the space.

Madrid-based Miguel de Guzmán has created a series of unusual architectural movies with his studio Imagen Subliminal, which he runs in partnership with Rocío Romero.

Others include a sci-fi photoshoot for half-sunken house in Madrid, a horror movie set in kiosks of a temporary street market and a day-in-the-life film that follows the resident of an apartment with moving walls and secret furniture.

The English for Fun school is among a number of schools that architects have designed to engage children with learning. Others include a kindergarten that uses slides and climbing frames to connect brightly coloured playrooms and another designed as a large set of steps. 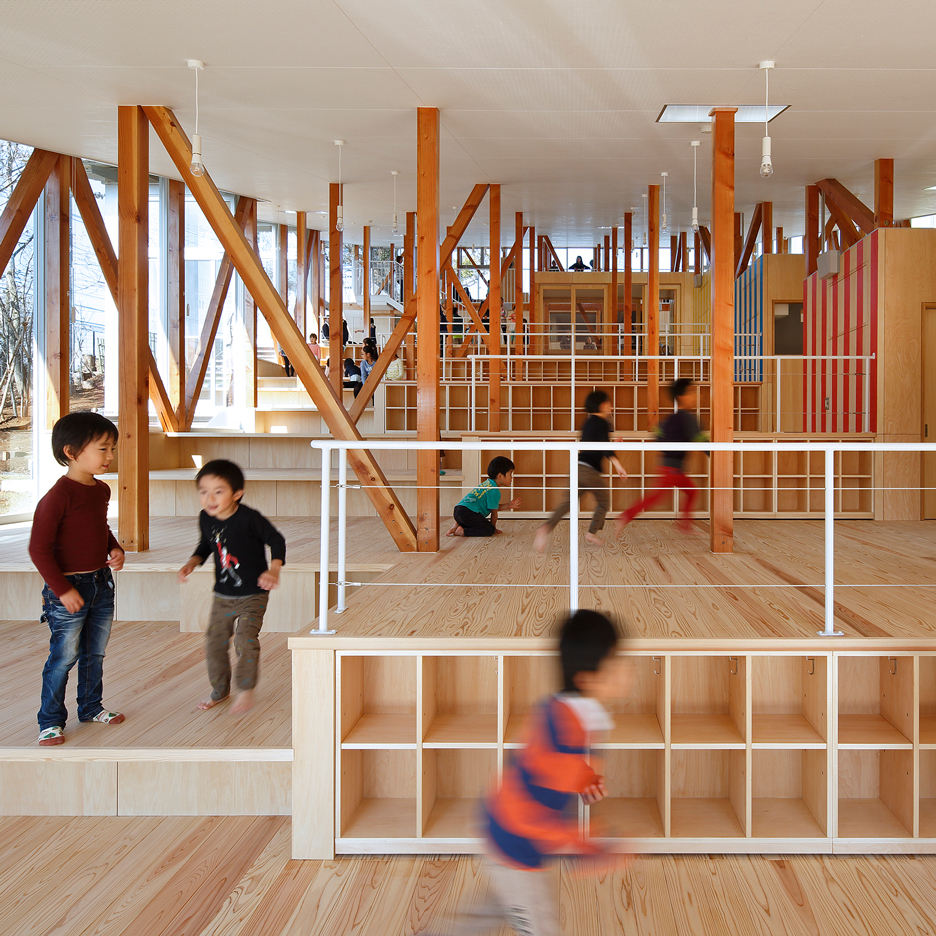 Photography and video is by Miguel de Guzman from Imagen Subliminal.