For $90 (approximately £72), Gehry's MasterClass will include 15 video lessons tutoring students on his architectural philosophy by using case studies, sketches and models.

A downloadable workbook with recaps and assignments accompanies each class. Students will also be able upload their own videos to get feedback from the rest of the group, with Gehry critiquing select works.

Gehry's masterclass, which will begin in spring this year, will also give a glimpse into his never-before-seen model archive.

"When you build a building, any building, start with the simple block model to see where that goes," says Gehry in a promotional video for the course.

"As an artist, I got constraints, gravity is one of them," he continues. "But within all those constraints I have 15 per cent of freedom to make my art."

"I'm always trying to express movement, I was fascinated with the fold so basic to our first feelings of love and warmth. These ideas are scary as hell to tell to the client, they can reject you and they will. But create the logic for it as you go, stretch it into another place." 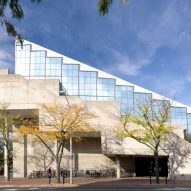 The Canadian-born, Los Angeles-based architect is famed for the concave and convex planes that often make up his buildings, like the rippled form of his New York skyscraper, the Walt Disney Concert Hall in Los Angeles, and the Fondation Louis Vuitton in Paris.

During the course, Gehry will also discuss the philosophy behind his work, urging his students to do "something for humanity" rather than the economy.

"Most of our cities are built with just faceless glass only for economies and not for humanities," he says. "Whatever you do, promise me that every project you make or design you'll take the risk of doing something for humanity."

The sentiment echoes a previous statement made by the architect during a Spanish press conference in 2014, during which he claimed that most architecture today has "no sense of design".

"In the world we live in, 98 per cent of what gets built and designed today is pure shit," he told the group of journalists. "There's no sense of design nor respect for humanity or anything. They're bad buildings and that's it."

"98% of what gets built today is shit" says Frank Gehry

Gehry will join other well-known MasterClass instructors, with past editions including Werner Herzog on filmmaking, Deadmau5 on electronic music production and Serena Williams on tennis.

Last year, the architect came 34 in Dezeen's Hot List ranking, a guide to the most newsworthy and searched-for figures in the design world, with a handful of contentious new projects.

These included a masterplan for the revitalisation of the Los Angeles River, which was fiercely criticised by a local landscape architect, and a huge development along LA's famous Sunset Strip.