Friends and family of late fashion designer Richard Nicoll have worked alongside Pantone to develop a colour in his honour, which was used by Roksanda Ilincic at her Autumn Winter 2017 show.

Nicoll Blue was chosen by a group of his close friends and developed by the Pantone Institute before his untimely death last year aged 39.

The soft blue colour was described by Pantone as modest and humble, and is itended to represent Nicoll's consitent use of blue in his fashion collections.

"Richard was a designer whose talent and character inspired all around him," said fashion writer Sarah Mower. "He registered his affinity for the
spectrum of blues hundreds of times in the collections he showed in London."

The shade was revealed in the run-up to this year's London Fashion Week, where it was used to paint the entrance to the British Fashion Council's showspace.

A further tribute was made by fashion designer Roksanda Ilincic, a close friend of Nicoll, who opened her Autumn Winter 2017 show with a look entirely in the blue colour. 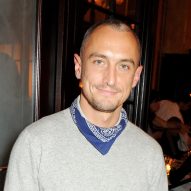 "For a decade, Richard's life-enhancing gift for bonding people together contributed immeasurably to the spirit of a whole London fashion generation," said Mower.

"The visual presence of Nicoll Blue throughout the main fashion week venue is a way to remember and celebrate a great London friend and to convey our respects and eternal gratitude to his family."

Nicoll passed away in Sydney in October following a heart attack.

The designer, who was born in London but raised in Perth, had relocated back to Australia following the closure of his eponymous brand in 2015.

He had subsequently taken up a position as creative director at British retailer Jack Wills, and was reportedly due to start at Adidas in January.

Over the course of his career, he became known for his minimalist approach and sharp tailoring, as well as his consistent use of blue.

He graduated from Central Saint Martins with an MA in womenswear in 2002, when his entire graduate collection was famously purchased by Dolce & Gabbana. Last week, the institution paid tribute to him with a minute's silence before the MA Fashion show.