CplusC Architectural Workshop proposes the conceptual scheme as an alternative to levelling the brutalist Sirius social housing building, which the New South Wales (NSW) government plans to sell off for redevelopment. Drawing inspiration from the building's modular form, as well as Safdie's iconic Montreal housing complex, the architects propose a series of towers made up of staggered blocks and terraces.

"Designed to incorporate the existing building and preserve the current iconic brutalist facade, the proposal expands vertically and horizontally with one, two and three bedroom apartment pods," explained the studio, which also took cues from the conceptual work of Archigram and the Japanese metabolist movement.

"Immersed not only in greenery throughout all living spaces, the pods branch off the current vertical circulation cores, providing a practical link between old and new."

The Sirius building was designed by architect Tao Gofers in the 1970s. It is located in the city's The Rocks area, giving residents unparalleled views of the Sydney Opera House and Harbour Bridge across the water.

A rigorous preservation campaign public protests and a ban on unionised workforces partaking in the demolition works led by Save our Sirius has failed to see the building heritage listed.

Among the eminent supporters of the campaign to save the building are Sydney mayor Clover Moore, comedian Tim Ross, Australian Institute of Architects president Ken Maher and UTS's head of architecture Anthony Burke.

New South Wales' environment and heritage minister Mark Speakman chose to ignore the advice of heritage bodies by making the decision not to list the building last summer.

The proposed redevelopment of the Sirus apartment block is part of a wider sell-off of public housing throughout the nearby Millers Point neighbourhood, which many claim will marginalise the city's low-income residents.

Just two residents remain at the Sirius building, one of whom has installed a huge illuminated SOS sign in her upper floor window.

Speakman's decision not to heritage list the building will be challenged at a hearing at the NSW Land and Environment Court on 6-7 April 2017.

"The Sirius project is equal parts provocation and conceptual catalyst, a spur to shift thinking and engage with place making on a new and larger scale as much as a practical proposal," said CplusC Architectural Workshop. 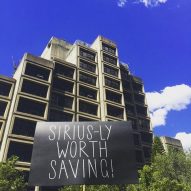 "Preserving the public housing of Sirius is key to the proposal and our cities success," the studio continued. "Economic diversity and mixed tenure living makes our communities more robust and equitable, leading to better health and engagement outcomes for all citizens."

The building's architect Tao Gofers will be giving tours of the building from 11 to 25 March 2017 as part of Art Month Sydney.