Du Toit wins the RAIC 2017 Gold Medal two years after he died, aged 75, of injuries sustained during a cycling accident.

He was considered one of Canada's most important architects and urban planners. Born in South Africa, he established his practice, now known as duToit Allsopp Hillier (DTAH), in Toronto in 1975.

Du Toit worked with Australian architect John Andrews and local studio WZMH Architects on the CN Tower – a 553-metre-tall concrete communications mast, which held the title of world's tallest freestanding structure for 34 years after it completed in 1976.

"He was a leader and an innovator," wrote the Royal Architectural Institute of Canada (RAIC)'s five-member selection jury. "He has made timeless contributions to significant parts of our urban environments across the country."

During a career that spanned 45 year, du Toit worked on Ottawa's Parliamentary Precinct, the Wascana Centre in Regina, and projects at more than 25 university campuses.

His contributions to urban design included the Distillery District and Queens Quay in Toronto, and the Downtown South Urban Design in Vancouver.

"He was very much the 'master architect' working and coordinating a wide range of groups, institutions, and communities," said the jury. "He anticipated and planned for unknown futures. He took stewardship on as an important component of his relationship with his clients. He was also committed to research, teaching, and sharing." 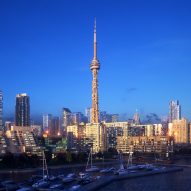