News: Brian MacKay-Lyons has been selected for Canada's most prestigious architecture award thanks to his "pure, dignified, poetic and beautiful" projects (+ slideshow).

MacKay-Lyons – whose projects include the Canadian Chancery in Dhaka, Bangladesh, and private houses across Canada – was selected by a jury as the recipient of the 2015 Royal Architectural Institute of Canada Gold Medal.

"It is a great honour to be recognised by one's peers," said the MacKay-Lyons Sweetapple Architects co-founder. "In an increasingly globalised world it's nice to reaffirm a way of making architecture about place – its landscape, climate and material culture." 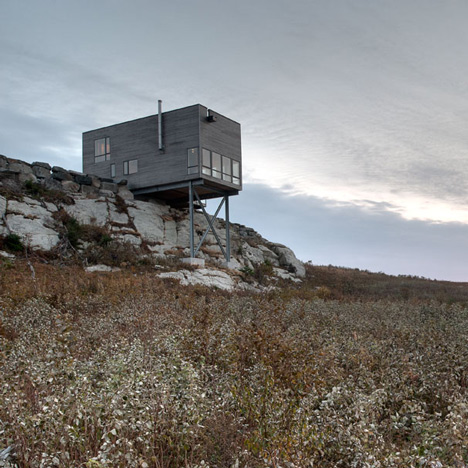 "The RAIC Gold Medal is all the more meaningful because it recognises a body of work rather than the fashion of the day," he added.

The Nova Scotia architect worked in China, Japan, California and Italy before returning to Canada in the 1980s and setting up his own practice Brian MacKay-Lyons Architecture Urban Design in Halifax. He later teamed up with Talbot Sweetapple to form MacKay-Lyons Sweetapple Architects.

He is also a professor at Dalhousie University and the founder of Ghost Lab, an educational summer programme held on his family farm between 1994 to 2011.

The jury, which included previous gold medallist Peter Busby and former RAIC president Paule Boutin, described MacKay-Lyons as an "authentic and original voice in the development of a contemporary expression of traditional regional architecture".

"His work is universally recognised as pure, dignified, poetic and beautiful," said the jury. "His work comes from an intimate connection with his communities."

"He continues as a major influence on current and future generations of architects," they added.

MacKay-Lyons will receive the medal at a ceremony during RAIC/AAA Festival of Architecture, which takes place in Calgary from 3 to 6 June.