Models were disguised within oversized forms made from layers of wadding at this season's Comme des Garçons Autumn Winter 2017 show during Paris Fashion Week.

Designer Rei Kawakubo's latest collection for the Japanese fashion house was presented on Saturday as part of Paris Fashion Week.

Titled The Future of Silhouette, the show mused on how fashion will develop in the future, and what garments may appear in years to come.

Throughout the show, most looks were presented in groups of twos or threes. The show opened with two models each wearing white, armless dresses that featured exaggerated curves and visible seams.

A second set of looks appeared to be made from recycled fabric waste, similar to that used to stuff mattresses and soft furnishings, while a further dress – the only one to be presented alone – looked as though it was constructed from screwed-up brown paper.

The rest of the collection included an hourglass-shaped garment covered in curlicue embroidery, a red velvet jumpsuit, some silvery blob-shaped pieces made from Mylar, and a set of ankle-length coats – again with no arms.

The Future of the Silhouette will be the last collection to be added to the Comme des Garçons exhibition at New York's Metropolitan Museum, which begins in May this year and is one of Dezeen's top picks for shows in 2017.

The exhibition, titled Art of the In-Between, will feature approximately 150 examples of Kawakubo's womenswear for Comme des Garçons dating from the early 1980s to her most recent collection.

Throughout the collection, each of the 150 pieces will be organised into eight categories: Fashion/Anti-Fashion, Design/Not Design, Model/Multiple, Then/Now, High/Low, Self/Other, Object/Subject, and Clothes/Not Clothes.

The designer, who began the Comme des Garçons brand in the early 70s, is also the mastermind behind the multi-brand fashion store Dover Street Market.

"I want to create a kind of market where various creators from various fields gather together and encounter each other in an ongoing atmosphere of beautiful chaos: the mixing up and coming together of different kindred souls who all share a strong personal vision," she said. 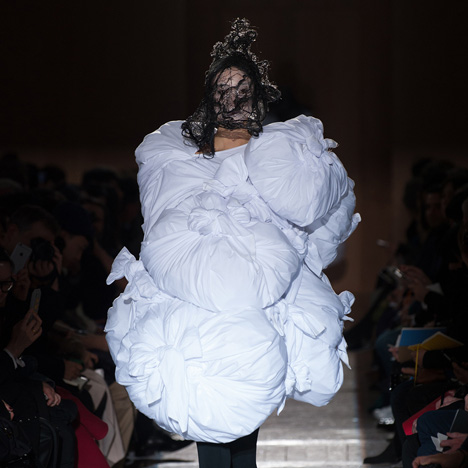