Designer Rei Kawakubo's latest Comme des Garçons collection, which she described as a "ceremony of separation”, was presented during Sunday's dramatic catwalk show in the Mineralogy Gallery at the Muséum National d'Histoire Naturelle. 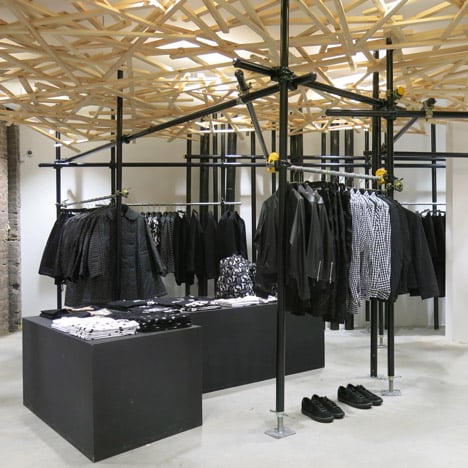 The fabrics and shapes used for the mainly black-and-white collection all have associations with death.

Lace was commonly integrated into Victorian mourning dress, while satin is often employed as coffin lining.

For the collection's first look, white sheets that could have been deathbed covers were bundled up as if ready to be washed, and formed into a dress.

The second model was similarly wrapped in sheets that were shaped to expand towards the base of a dress, which also featured bows tied up the front.

A similar design was shown later in thick layers of cream lace.

The bow, sometimes found in funeral floral arrangements, became a repeated motif throughout the collection.

Small ties were used to pick out the edges of a white garment with restricted sleeves connected to the torso area.

The same bows also covered a pale skirt and continued in a line up to the shoulder of a matching top.

Another model was wrapped in lengths of material that resembled bandages as if she had been partially mummified.

The stuffed bundles from the beginning of the show were recreated in black lace, and more dark-coloured outfits were formed from tangles of stuffed sausage-like forms.

Sections were cut out from garments, creating missing pieces from the outfits, and one circular dress with a black outline and white centre could be interpreted as a giant hole.

The shape of a large conical veil was repeated as a layered top and a skirt to form a tiered black ensemble.

Where visible, the models' hair was also used as veils, gelled forward and separated out so the strands formed net-like covers over their faces.

The show culminated in a voluminous, black shin-length piece that was patterned and bunched across its surface and topped with a final bow.

To fit down the narrow catwalk in such large attire, models stopped and turned to face each other momentarily as they passed.

Junya Watanabe, whose label sits within the Comme des Garçons brand, showed origami-influenced garments and headdresses in Paris on the same day as Kawakubo's show.