Colourful walls and irregularly placed windows with vibrant yellow frames add individuality to this prefabricated house in Stockholm, which was designed by Swedish studio HelgessonGonzaga Arkitekter.

Stockholm-based HelgessonGonzaga Arkitekter designed the 172-square-metre House 669 for a couple and their three children.

The architects worked with the client's friend, a local manufacturer of prefabricated houses, to create a residence that could be assembled quickly and cheaply with tailored aspects to better suit the family's life.

Prefabricated, grey-painted walls clad in grey-painted wooden panels and a zinc roof make up the two-storey gabled residence, which the architects describe as resembling "a quick drawing" of a house. Windows with yellow wooden frames break up the uniformity of the grey exterior.

Inside, the architects left the pitched roof exposed, while a void in the upper floor creates a double-height lounge. The polished concrete flooring and the light birch-plywood panels that line the ceiling are intended to provide tactile interiors.

"In the interior, on the other hand, the ambition was to show that this standardised production process, still can facilitate spatial sensitivity and attention to material and detail," he continued.

Colour is used on the walls to indicate the key structural elements in the assembly of the house, in contrast to the white-painted walls.

A yellow-painted wall extends the full height of the void in the lounge, which also provides an opening for the chimney of the black wood burning stove.

The purple-hued wall on the other side contrasts this, while the kitchen, located behind the yellow wall, is completely coloured in a green-blue hue that is also used for the cabinets.

The colours also feature in the four skylit bedrooms on the upper floor. The three children's bedrooms all feature a similar layout and small windows that create little lookouts.

Other recent projects in Sweden include a villa that fans out in all directions and a weekend retreat with views over the treetops. 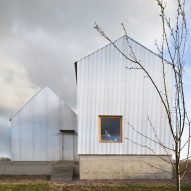 Photography is by Mikael Olsson

More architecture and design in Sweden