American architect Richard Meier has completed a trio of residential buildings and two charter schools in downtown Newark, the city where he was born.

"Teachers Village is one important component of several new development initiatives in New Jersey, and the construction of all these new buildings reflects our commitment to the revitalisation of downtown Newark," said Meier, 82, who founded his eponymous New York-based practice in 1963 and received the Pritzker Prize in 1984.

Former parking lots were razed to make way for the education-centred development, which began construction in 2012.

A goal of the project is to provide teachers the opportunity to live near their workplace and to "experience high-quality, healthy living in an affordable, safe environment downtown".

The apartments are also available to tenants who don't work in education, although teachers get first priority.

The completed buildings vary in height, size and facade treatments. "Each new building is site specific and designed relative to its context," said Meier's studio.

The development has three charter schools, two of which were designed by Meier and opened in 2013. The two schools occupy a multi-storey building clad in iron-spot brick and aluminium composite metal panels.

The apartment blocks – dubbed Workforce Housing Buildings 1, 6 and 7 – all have glass curtain walls mixed with other types of cladding.

The five-storey Building 1 is faced with stucco plaster, while Buildings 6 and 7 – both six storeys – are sheathed in aluminium composite metal panels.

Collectively, the apartment buildings contain a total of 123 units, 20 percent of which are studios designated as affordable housing.

The project also entailed the creation of 65,000 square feet (6,038 square metres) of retail, along with new landscaping and streetscape improvements.

Sustainability was a guiding factor in the design. White roofing, green courtyards and high-performance glazing are among the eco-friendly features.

"Teachers Village is one of the first developments in America to pursue the LEED Neighborhood Development designation by the US Green Building Council, indicating that the project meets the highest levels of sustainable design," said Meier's firm.

"We look forward to continuing our effort in further contributing to future phases of this development – transforming and enhancing a part of the urban fabric," said Vivian Lee, associate partner-in-charge of the project, which is backed by local developer RBH Group.

Meier's current projects include a black tower planned for a waterfront site in Manhattan, and he recently completed a new hotel in South Korea that was built for the 2018 Winter Olympics.

The architect's Douglas House, which is perched above Lake Michigan, was added last year to the USA's National Register of Historic Places. 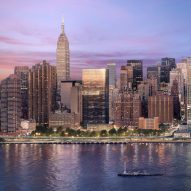