The designation by the National Park Service recognises the house's historical and architectural significance, joining a list of monuments deemed worthy of preservation.

Completed in 1973, the home was commissioned by the Douglases after they contacted Meier to buy the blueprints for his earlier Smith House in Connecticut.

"I replied that while I was not prepared to sell the drawings I would certainly be willing to design a new house for them along similar lines," said the architect.

He first started designing for a site on a residential subdivision in northern Michigan, but the developer dismissed the proposal because it didn't have a pitched roof.

"To my delight, the Douglases responded to this impasse by promptly selling the plot and looking for another site, and that was the beginning of a very gratifying collaboration," Meier said.

They found a remote spot close to Harbor Springs – a steep patch of forested land that slopes down to Lake Michigan.

Its topography and orientation towards the water means that the 4,500-square-foot (418-square-metre) house has to be entered on the top of its five stories, accessed from the street via a bridge.

"It is truly a house of opposites: to leave the house for instance, you go up instead of down," said Meier. 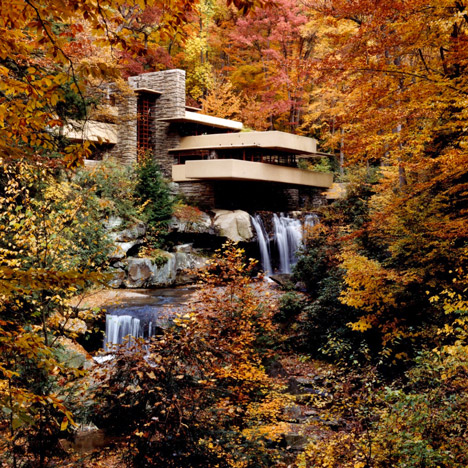 Private rooms are located on this side of the building, where the facade is pierced by square apertures and horizontal strip windows.

The entertaining spaces of the opposite side feature expansive sections of glazing that look out over the trees to the lake beyond.

"Usually when people enter a house, they expect the outside to be brought in, but in the Douglas House, the opposite occurs: you are transported outside, over the lake and into the trees," Meier said.

The entrance vestibule leads to a decked roof terrace, and offers glimpses down to the living and dining areas through voids.

A fireplace is located opposite the entry, but is two storeys below the door. Stainless-steel smokestacks on the outside rise up past the roof level to mark its location.

Four open corridors stacked one above the other behind a screen wall provide horizontal circulation, while internal and external staircases at the corners provide vertical passage.

Almost the entire building, which has a wood frame and steel column structure, is rendered white.

Meier is renowned for his pairing of white and glazed surfaces for his buildings, which include the Barcelona Museum of Contemporary Art and the Getty Center in Los Angeles.

He described his love for the colour during his acceptance speech for the 1984 Pritzker Prize.

"White is the most wonderful colour," he said. "White conventionally has always been seen as a symbol of perfection, of purity and clarity."

However he recently eschewed his signature palette for a black glass apartment block on New York's East River.

Other recent projects by Richard Meier and Partners Architects include a private museum and library in New Jersey to house his vast collection of models, sculptures, paintings and books, and a hotel in South Korea that conforms with his usual white and glass palette.