Spanish designer Marta Colmenero has created a set of illustrations that capture the concrete forms of brutalist architecture across the globe.

The series features some of the world's best-known brutalist buildings, from Moshe Safdie's Habitat 67 to Le Corbusier's Unité d'Habitation.

The curved exterior of the Barbican Estate – designed in the 1950s by British firm Chamberlin, Powell and Bon – is shown, alongside London's Balfron Tower – a 27-storey slab block created by Hungarian-born architect Ernö Goldfinger. Colmenero's illustration features its distinctive connecting bridges, against a bright blue sky.

Colmenero has focused on the primary colours of Le Corbusier's 18-storey Unité d'Habitation, which was completed in 1952, and also the more recent addition to the list of brutalist landmarks, Rem Koolhaas's De Rotterdam in The Netherlands. Also included is Igor Vasilevsky's cog-like Kurpaty Health Resort, in Ukraine.

Outside of Europe, Colmenero picked the distinctive profile of Raffaele Contigiani's Hôtel du Lac in Tunis, and Safdie's Habitat 67 in Montreal. Presented in 1967 as the future of cities, Habitat 67 is experimental modular housing made of 354 stacked concrete "boxes".

Brutalism has been riding a wave of enthusiasm of late, and has been the subject of several books rediscovering and reappraising the style. The style's revival has prompted designers to create everything from a children's foam playground to mini sculptures based on typical brutalist shapes and textures. 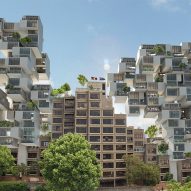