Passengers flying on US airline Delta will be able to eat their in-flight meals from tableware by designers Patricia Urquiola, Ronan and Erwan Bouroullec, and Humberto and Fernando Campana from next month.

Italian brand Alessi asked some of its best-known designers to create serviceware sets for Delta.

Each has adapted existing items from the company's range into bespoke interpretations, which will be available in the airline's premium cabins.

Spanish designer Urquiola revisited her Orloff bowl, produced from a single, round sheet of metal without the use of welds. It informed a set of faceted containers with similar characteristics.

"I am very attracted to surfaces and their interaction with reflected and diffused light," Urquiola said.

"This collection's characteristic facets, along with its silver finish, play with light in a way that results in reflections and chiaroscuro effects that are both elegant and amusing."

Brazil's Campana brothers designed both a water and a wine caddy using thin sticks of bent aluminium, as an extension of their 2004 Blow Up collection.

"Back in 2004 we partnered with Alessi to explore ways of fusing industrial processes with the traditional techniques of Brazilian craftsmanship," the duo said. "We selected aluminium rods to be assembled together randomly to create several types of light and airy three-dimensional pieces."

The Bouroullecs, from France, created the Ovale glassware and ceramic dinnerware that comes in a variety of subtly different shapes.

"There is a few symbolic projects that designers romantically dream to do – tableware for an airline company is one of them," said the brothers.

"The Mami cutlery set is part of a series of projects characterised by smooth flowing lines in the maternal code," said the designer, who also created a napkin ring with his KK cut-out doll icon.

A heart-shaped teaspoon by Italian designer Miriam Mirri joins Giovannoni's set of cutlery. The design – in red plastic, or stainless steel to match the rest of the items – has been scaled down from a larger spoon, first created for a couple to share ice cream from the same scoop.

"The form grew out of overlapping two teaspoons in a way that two people could enjoy the same spoonful of ice cream without invading the other's part, like a game between lovers," she said.

"[This version] is not big enough for sharing, but I still believe that finding a heart in your cup each morning helps bring some sunshine into your day."

The partnership between Delta and Alessi was first announced in November 2015, and the designs are finally being rolled out in Delta One and First Class cabins on 1 April 2017, then in Delta Premium Select later in the year.

"The Alessi for Delta collection is part of our continued investment in delivering a world-class, global culinary experience that will elevate our customer in-flight dining experience to new heights," said Allison Ausband, Delta's senior vice president of in-flight service.

Previous airline-designer collaborations include Marcel Wanders for KLM and Marimekko for Finnair.

Photography is by Buzz. 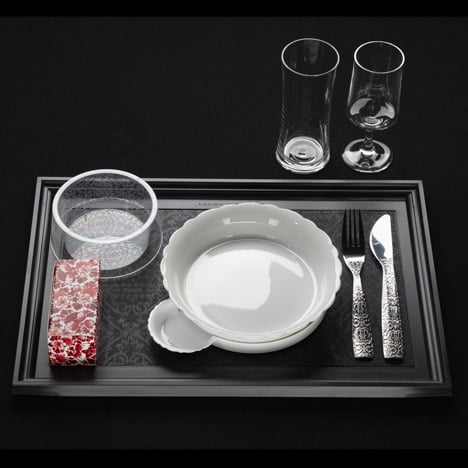 Tableware by Marcel Wanders for KLM