A zigzag forms the junction between warm-coloured carpet and grey tiling in this Barcelona home, which has been overhauled by local studio Arquitectura-G, and also features vaulted ceilings.

Located in Barcelona's Ensanche district, the long and thin 149-square-metre flat extends through from the street to an interior courtyard on the other side of the building.

Tasked with opening up the deep interiors to plenty of natural light, Arquitectura-G removed a long corridor that distributed spaces, as well a series of dividing walls.

To break up the open-plan interiors, the studio adopted a similar approach to its renovation of another Barcelona apartment.

This type of vaulted ceiling – known locally as a Catalan arch – is a common feature in old Barcelona properties.

"The decision that was taken was to remove the partition walls and the corridor distribution as much as possible, so that a chained sequence of spaces with different usages could be generated," the architects explained.

"The limit between these uses is determined by changes in the pavement level and in the false ceilings or apertures in the load-bearing walls," they continued.

An open-plan lounge and dining area occupy one end of the flat, where two large windows face onto the courtyard.

The floor is covered in sisal – a woven textile made from stiff plant fibres that gives it a robust and textural dimension.

But the lounge is set on a lower level, featuring a large corner sofa covered in cushions that match the colour of the carpet. A second, smaller corner sofa is placed opposite, jutting into the raised dining room platform.

A doorway with a zigzagging upper corner leads through from the living area to the rest of the apartment. The jagged profile matches the staggered junction between the carpet and grey tiles.

In the entrance hall beyond, a raised carpeted platform runs along one side of a fireplace, which the architects moved to make it a more central feature of the apartment.

"The fireplace was intentionally emphasised by moving it and integrating it into the new interior topography, so that in this way it's understood as a crucial interconnecting element," they explained.

The kitchen occupies the central core of the flat and is lit by two windows that provide views onto another internal courtyard.

A pair of islands with shelving beneath are clad in a combination of wood and grey tiles that continue from the floor.

Appliances, including the fridge and oven, are fitted into a wooden volume. This box is also used for wardrobes, as the floor steps down to lead through the dressing area.

Carpet returns here and continues to the rear of the apartment, which looks onto Girona Street. Currently occupied by a master bedroom with a large en-suite bathroom, the space could later be divided into four individual rooms.

In the bedroom, the base of the bed and the side tables are all clad in the carpet, while wardrobes occupy a volume in the middle of the room.

The bathroom walls are lined in white tiles, while grey tiling provides the flooring. Semi-circular pieces of glass form the washbasin and shelf below.

Other projects by the studio include a revamped a country house, a Barcelona boutique filled with sisal-covered boxes and an apartment featuring wooden storage and mezzanines. 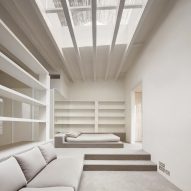