Arquitectura-G has renovated a skylit apartment in Barcelona for a young couple, creating a sunken lounge and instating a pale colour palette throughout to create a minimalist aesthetic.

Occupying the top floor of a residential building on Reig I Bonet street in the city's Gracia district, the 55-square-metre flat has lofty 3.9-metre ceilings.

Set on top of a raised platform, the white-painted shelving divides the flat into two, separating the kitchen-cum-dining room at the front of the apartment from the lounge and bedroom at the rear.

"The flat was conceived as an unique space distributed on different platforms that meet the needs of a young couple," said the architects. "This creates a new carpeted topography where the uses are mixed and interfere between each other."

"The shelving embraces the platform of the living space and the bed," they added, "and in this way one common space is constituted where all the activities like sleep, rest, read, listen to music or watching movies happen consecutively, or simultaneously, without any kind of hierarchy or order of importance."

At the front of the residence, the kitchen area steps up to the dining room level. Three more steps lead down to the lounge area, where the studio created a large skylight above the existing roof beams.

"The project respects the pre- existing rooftop structure and the authenticity of the wooden beams," said the studio. "Rooftop glazing is introduced as one of the main solution accents in order to create a relation to the sky."

The lowered sofas are covered in cushions that match the colour of the carpet, while a black wood-burning stove occupies the corner – which is covered in matching grey tiles.

Across from this space, the bed is placed on a platform with shelves to the side and a large mirror behind – one of a series of reflective surfaces used to open up the space and reflecting the natural light.

From here, a door leads to a dressing room, while another set of wardrobes run along the dining room level. These disguise the entrance to the bathroom, which is the only part of the flat that remains out of view because of privacy and ventilation.

The apartment follows a number of others recently renovated in Barcelona. Bajet Giramé Architects reconfigured a 1970s flat for retired couple, while Nook Architects used mirrors to exaggerate space in another. 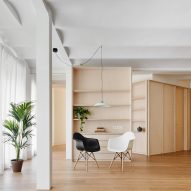