This week on Dezeen, OMA completed its first project in Dubai while the city's controversial Dubai Frame neared completion despite an ongoing lawsuit.

OMA has transformed four warehouses on Dubai's Alserkal Avenue into a cultural centre, the Dutch firm's first project in the United Arab Emirates.

Elsewhere in the city, the Dubai Frame is due to open later this year – even though an ongoing lawsuit filed by its architect, Fernando Donis, alleges the design was stolen.

Another unusual skyscraper was conceived this week – Oiio imagined The Big Bend skyscraper for New York as "the longest building in the world".

Meanwhile, fully autonomous cars moved another step closer to California's roads and Nio launched a driverless electric car concept that it plans to make a reality by 2020.

It was revealed that the Brazilian president has moved out of his Oscar Niemeyer-designed residence after sensing "bad energy" and claiming it could be haunted.

In the UK, Foster + Partners was selected to create two new bridges across a river in Suffolk, England and a report revealed that London's "undervalued" architecture sector is worth £1.7 billion to UK economy.

In business news, Sebastian Wrong returned to Established & Sons as design director after a five-year hiatus.

And Yves Béhar's studio Fuseproject unveiled a television for Samsung – a design that is indistinguishable from a framed artwork when hung on the wall.

Popular projects on Dezeen included a New York apartment with transformable rooms, a rural stone villa in Portugal and a skinny Taiwanese townhouse.

Also this week, we announced a party with IKEA Festival in Milan. Meanwhile the deadline is fast approaching for our Brexit passport competition, and entries are already piling in. 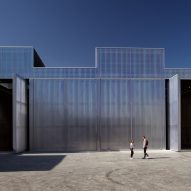