Fashion designer JW Anderson has curated an exhibition at UK gallery The Hepworth Wakefield that explores the way artists depict the human form through their work.

Anderson – whose work often explores ideas of gender and identity – has brought together over 100 examples of art, fashion, ceramics and design from the 20th and 21st centuries in the Disobedient Bodies exhibition.

The pieces on show include sculptures by Henry Moore, Sarah Lucas and Barbara Hepworth. Their placement in the space was decided by 6a architects, whose exhibition design uses fabrics from Anderson's archive to create a series of rooms.

The first of these rooms sees Henry Moore's Reclining Figure sculptures displayed against a series of photographs by Jamie Hawkesworth named The Thinleys.

These photographs are the result of a collaboration between Hawkesworth and Anderson, during which the pair explored different fabrics and how they can turn the human body into sculptural shapes.

At the centre of the space, Anderson – who was keen the exhibition include an interactive element – has created an installation of oversized jumpers that visitors can put on to transform their own bodies into abstract forms.

Throughout the rest of the gallery, Anderson has purposefully placed the art pieces along fashion pieces by designers such as Christian Dior, Jean Paul Gaultier, Rei Kawakubo, Helmut Lang, Issey Miyake and Vivienne Westwood to create a "direct dialogue".

Through Disobedient Bodies, Anderson also hoped reflect on the "way we consume images today", as well as giving visitors a glimpse into the things that inspire his own work.

"This is a rare and exciting opportunity for me to bring together pieces of art and fashion that have long inspired my own creative work and to see what happens when these objects rub up against each other," he said.

"I want the exhibition to mirror the speed and unexpected encounters that characterise the way in which we consume images today, as well as being a space in which to explore ideas of gender and identity that have been an ongoing part of my creative practice."

Disobedient Figures is the first in a series of shows at The Hepworth that will see key figures from creative fields outside the visual arts come and curate exhibitions. It will be on show at the Yorkshire gallery until 18 June 2017. 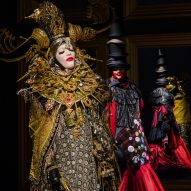 Daniel Lismore's Theatre of Self presents timeline of avant-garde ensembles