This board-marked concrete holiday house by Luciano Kruk steps over a sand dune in a coastal town near Buenos Aires, offering its summer residents views of a pine and acacia forest beyond.

Argentinian studio Luciano Kruk Arquitectos designed House in the Dune to fit the site's uneven topography, which slopes steeply away from the street towards a pine forest at the back.

"The house merges into its surroundings by following the terrain's natural forms and through the partial burying of its volume under the slope," said the studio.

One of the client's key requirements for the 165-square-metre residence – which used by his family in summer but rented out when not in use – was that the social space be the most prominent area.

Accordingly, the architects placed the kitchen, living and dining rooms alongside the entrance on the highest level. These rooms open to a deck area for barbecuing, a swimming pool and a garden, which are set on top of the bedrooms and bathrooms on the level below.

Large windows placed on the front and back of the top floor offer uninterrupted vistas through to the shrubbery and pine trees at the rear of the residence. On the shorter sides, rough concrete walls extend past the windows to maintain the residents' privacy.

"This wider setback, the mostly blind side walls, and the facades' permeability both at the front and the back made it possible to achieve a space configuration that is private enough and that provides shelter from the outside views, which would undermine the house's intimacy," the architects explained.

The house's concrete walls are imprinted with the outline and texture of the pine planks used as formwork. The technique, which is often used by the firm in its coastal architecture, creates a rugged appearance and is designed to help reduce maintenance.

An outdoor staircase made of concrete parts the two concrete volumes, leading from the deck to the wooded area below.

Inside the house, a second staircase links the social and private areas, and cuts between the living room and the kitchen-cum-dining area.

On the lower floor the staircase also separates the master bedroom and en-suite from two secondary bedrooms with a bathroom in between at request of the client.

Each of the bedrooms open onto a patio partially covered by the overhanging roofs, which help to shade the ample glazing during hours of strong sunlight.

Founded by Luciano Kruk in 2012, the Buenos Aires-based firm has completed a series of board-marked concrete holiday homes along Argentina's coastline, including one in a seaside resort near Buenos Aires and another with a rooftop pool that offers sea views. 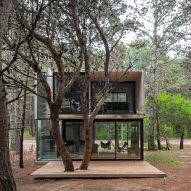 Photography is by Daniela Mac Adden .