Kruk and his Buenos Aires-based studio designed Casa H3 as a holiday home for three sisters and their respective families.

The concrete walls of the house are imprinted with the outline and texture of the pine planks used as formwork.

This technique – often used by Kruk in his coastal architecture – is designed to create a rugged appearance and to reduce maintenance, but also to draw a connection between the house and its wooded setting.

The sisters requested a house with clearly defined zones for socialising, as well as areas to retreat to for privacy.

In response Kruk created an open-plan kitchen, dining room and lounge on the ground floor, and placed two bedrooms and a shared bathroom on the upper level.

"When we designed this floor plan, we aimed at making it feel both like an indoor space, sheltered by the roof and the windows, but at the same time somewhere in between, in a continuum with the outside," said Mariana Piqué from the studio.

"In this way, the layout of the house is the result of an architectural synthesis of the sisters' intentions and desires," she added. 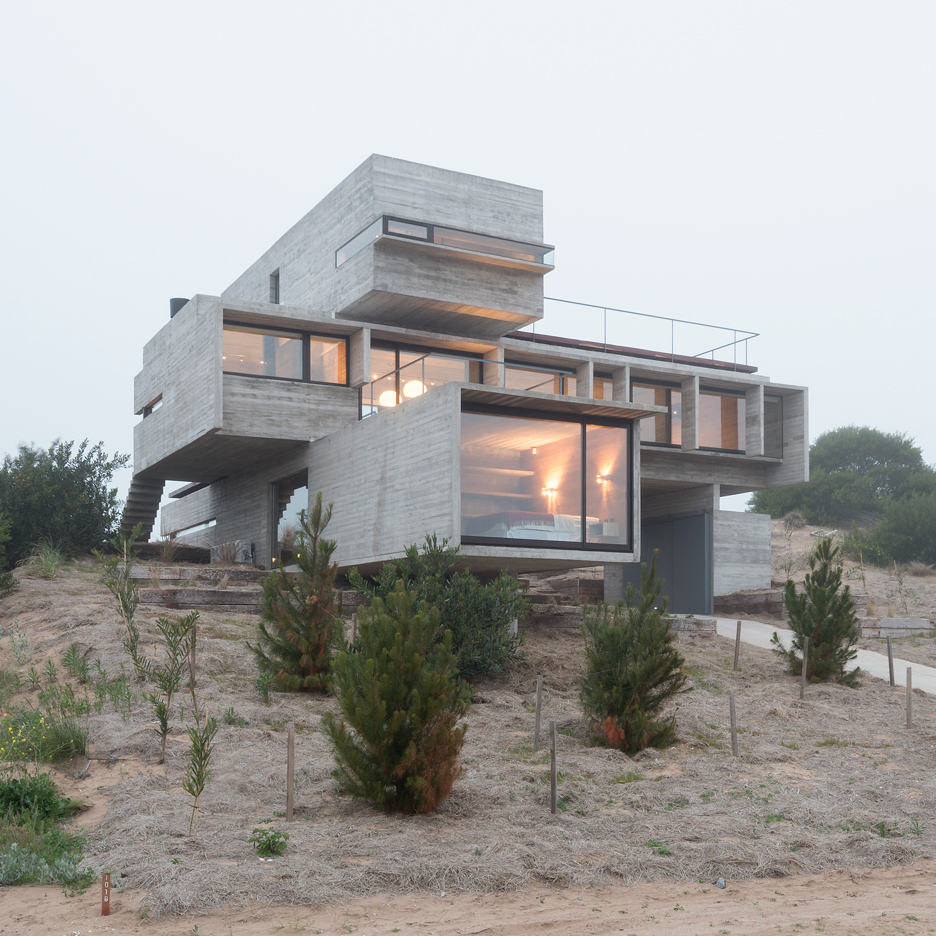 "In its minimum scale the house rises by its own will, but also integrates itself respectfully with its surroundings, both natural and human-built."

The bedrooms and living space open onto terraces on one side of the plot, with the base of the upper balcony projecting away from the facade to partially shade the wooden deck below.

The bedrooms and living space feature floor-to-ceiling glazing. Additional slabs of concrete project away from the facade to act as privacy screens.

"On account of the abundant shadows provided by the profusion of the woods, there was no need to reach for architectonic devices to reduce the sun's incidence inside," explained Piqué.

"As a matter of fact, apart from connecting the house interior and gaining visuals, the windows of the house also absorb the light that dribbles through the dense canopy of the trees," she added.

Inside, concrete furniture is integrated into the architecture.

At ground level, the concrete staircase and table are used as an organisational device, to partially separate the living space without distrupting sight lines.

"Intending to keep the needs for equipment at a minimum, even furniture was conceived as a part of the concrete volume," said Piqué.

"Given the house's scale, the use of crossed views and vanishing points aimed at unifying and fluidifying the space in the room," she added.

"Instead of confining the house's different uses into separated rooms, they have been connected with each other, aiming at producing the general feeling of spatial expansion."

Photography is by Daniela Mac Adden .