Melbourne Design Week has put the focus on Australia's legal replica furniture market with an exhibition of fake Jasper Morrison chairs that have been burned, cut, glitter-bombed and otherwise altered.

The 26 Original Fakes exhibition opened last week as part of Melbourne's first annual design week. It sees 26 Australian designers given a replica of Jasper Morrison's Hal chair, designed for Vitra in 2010, to adapt as they see fit.

Replicas of the chair are readily available in Australian specialty stores – a situation curators Dale Hardiman and Tom Skeehan wanted to draw attention to, with Morrison's permission.

"The exhibition has been incredibly topical in Australia, as we have, with Jasper Morrison's blessing, had 26 Australian designers hack, change and re-evaluate a replica chair – some completely against replica furniture, and some who aren't so bothered," Hardiman told Dezeen.

Some designers have used their chairs to make overt statements, with Adam Goodrum wrapping his in a garbage bag tagged "Unethically made. Ready for landfill", and Daast studio engraving a satirical letter that begins "G'day Jasper" into theirs.

Andrew Simpson's is slapped with a sticker reading "100% fake crap from China", but makes a bigger statement with the silhouette of the Sydney Opera House that is cut into its backrest. Unlike Hal, the opera house image has been protected by trademark since 2014, meaning it actually would be unlawful to sell this version of the chair.

"The legality of producing the replica chair reflects back on the fact that there is an inconsistency in the law, which as it stands only benefits the wealthy and the powerful," said Simpson.

"Unfortunately, great expenses involved with the IP protection laws could easily prevent any designer from protecting all of their products, due to the large number of designs they produce," he continued. "The original design of Hal chair was not registered or trademarked, which makes it 'legal' for replication."

In an Inception-like twist, Simpson's chair has been replicated by Jon Goulder, who is also showing a black Hal chair with an opera-house-shaped backrest, having seen Simpson's design on Instagram.

Others have taken a more constructive approach. Liane Rossler, a co-founder of Dinosaur Designs, designed a felt slipcover called Saved, which fits over any replica chair, providing a pocket to stash money to save for the original piece.

"As a designer, I share a design approach with Jasper Morrison to 'make something useful and responsible'," she said.

A number of designers have made drastic formal interventions, making the work unrecognisable from the original. Matt Woods has covered his chair in goo and glitter to make the work titled You Can Polish a Turd, while Studio Gram made a melted-looking Hal to reference tar and the tobacco industry.

Poetic entries come from Tom Fereday, whose solid black cast concrete creation is formed from the negative space of the chair, "leaving you with nothing but a shadow of the iconic form", and Hardiman, one of the show's curators, whose seat balances on precariously long stilts.

While the designers involved expressed a variety of attitudes towards furniture replicas, the 26 Original Fakes exhibition text by writer Penny Craswell condemns "unscrupulous businesses" that draw a profit without compensating the original designers.

"Fake furniture takes the original design and perverts it," she writes. "The image in the magazine might look the same, but the object is fundamentally different – not just in quality, longevity, function and aesthetics, but also in its very essence."

"What makes the original authentic is stripped away and all you are left with is an empty simulation."

The idea that the value of design is about more than just looks is part of what drove the curators to focus on a work by Morrison, who as well as being considered one of the world's best industrial designers, is known for his conscious approach.

The curators supplied the designers with one particular quote by Morrison to guide them: "Designs that are only concerned with aesthetics usually fail in the everyday, long-term sense. They are not much more than food for the endless exchange of creative ego and selling magazines."

26 Original Fakes is on from 16 to 26 March at Watchmaker, 296 Smith Street, Collingwood. Also on during Melbourne Design Week is Broached Monsters, Trent Jansen's exhibition of furniture inspired by creatures from Australian myth. 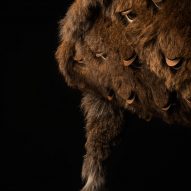 Photography by Daniel Herrmann-Zoll with styling by Natalie Turnbull.