Reykjavík-based designer Thórunn Árnadottir has combined local Icelandic materials with broken toys to create a series of interactive devices, which she is presenting at DesignMarch 2017.

Shapes of Sound consists of four objects, each designed to offer an alternative to mass-produced electronic children's toys.

Each object is fitted with a recycled soundboard that emits an electronic sound when the user interacts with it.

Based on simple geometric shapes and raw materials, the toys are a minimalist interpretation of the sounds they make.

There is a cube made from lava stone that was conceived as an "elf house", which emits a tinkling sound when held.

An aluminium cylinder emits a race car sound when it is rolled, while a furry ball made from sheep's skin bleats when touched.

There is also a pair of cones made of pine wood that, when stacked on top of another, form a Christmas tree that plays festive music.

To create the objects, Árnadottir used soundboards extracted from broken toys she collected at flea markets in China. "I wanted to use Icelandic materials to give the toys a second life," she told Dezeen.

"The shapes were kept as simple as possible, a simple reinterpretation of the sound. I'm fascinated by worlds that don't mix, so I was curious as to how a kitschy electronic sound would mix with natural, simple shapes."

Árnadottir, who graduated from London's Royal College of Art in 2011, said she was interested in how materials from very different sources could be combined to create sustainable objects that are design-conscious.

Described by the designer as sculptures rather than objects for children, Árnadottir said that her toys have the potential to be mass-produced in the future.

DesignMarch is Iceland's most important design festival. It runs from 22 to 26 March 2017 in Reykjavík, Iceland. 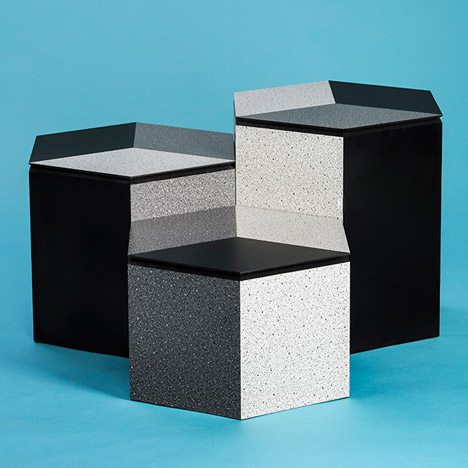