Chilean firm Studio Cáceres Lazo (SCL) has balanced a glass and concrete residence on a hillside outside Santiago, facing out towards the rolling countryside.

The GZ House stands on a hill overlooking the Chicureo valley just outside the Chilean capital.

Initially, the site was inaccessible. So the firm set about planning and constructing a road from the foot of the hill, while intervening in the landscape as little as possible.

The process took two years, during which time SCL continually modified the floor plans as they learned more about the client and their changing circumstances.

The view became increasingly important to the family, who wanted every room in the home to look out onto the valley.

Moreover, the clients had grown accustomed to apartment living and asked the studio to organise all the spaces on a single floor.

The result is a long, one-storey home set into the hillside.

The architects gave the residence a steel skeleton. Floor-to-ceiling glass panels are set into the frame along the valley-facing side, revealing the scenery across the home's length. Fibre-cement boards cover the rest of the house.

The colour of the structure's cladding contrasts with the vibrance of the surrounding landscape.

"The controlled material palette makes the house a constant monochromatic counterpoint to the extreme changes in colour and vegetation that the site undergoes through the seasons," said the studio.

The home rests on a retaining concrete platform, which sits on a small mound rising up from the hillside.

The podium protrudes past the knoll at its ends, causing the wings of the home to cantilever over the downward slope of the hill. Metal columns slant upwards from a flattened area below to help support the platform on either side.

The gravel section beneath the home also serves as a parking lot. A staircase at the back of the terrace leads up to the entrance at the east facade through a break in the concrete platform.

A black cuboid vestibule extends out from the hill-facing side. The passage is visually in keeping with the slightly protruding cladding attached to the steel frames, as well as with the building's projecting sides.

In addition to wanting their residence to remain single-storey, the clients asked for the layout to resemble a beach house. This allowed SCL to exchange a long hallway for a series of offset, multi-purpose spaces.

"As we saw it, the main difference between a holiday home and a regular one is the lack of definition in the program's boundaries," the architects said. "The design was to deliberately avoid creating one-purpose-only spaces, like corridors."

"The needed corridor in a one-storey home was then broken, displaced and distorted so that the pieces would not resemble a corridor and allow for other uses rather than the obvious, boring one," they added.

The lobby past the vestibule serves as a small gallery, displaying the client's art collection. The room connects the master bedroom to the south, a terrace situated opposite the entrance, and a living space to the north.

Isolating the master bedroom created independence for its occupants in an otherwise openly connected residence. The architects retained the home's fluidity within the private section by creating door-less transitions from the bedroom to a closet and a bathroom.

As the west facade is angled slightly in relation to the east face, the atrium broadens from the master bedroom to a small patio along its north side. The irregular shape creates an expansive feeling, while skylights spanning the room's five-metre-tall ceiling add to the spacious effect.

The lobby leads to a volume joining the kitchen, dining and lounge into one space. The room looks out over the valley through the glass panes taking up the west wall.

The lounge flows back towards the east into a second multi-purpose passage. The space provides access to the guest and children's bedrooms, while serving as a study and playroom.

A staircase located past glazing along the room's east wall creates a second entry to the home from the hill-facing side.

Other houses that take advantage of the rolling hills along Chile's Andes mountain range include a home that references the country's colonial style, and a charred cabin raised to offer better views. 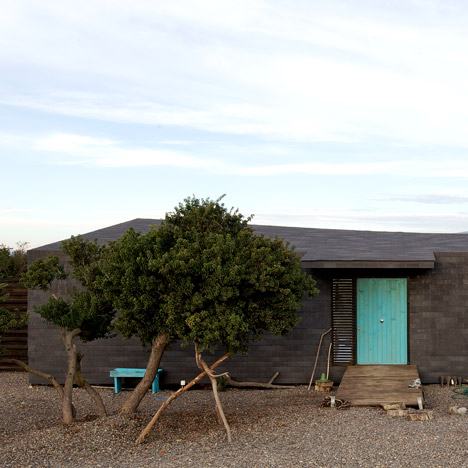