Austin architecture firm Design Hound has concealed a spa-like interior behind the understated facade of this local residence.

The two-storey Indian Trail House sits in an old neighbourhood of Austin, Texas. Approaching the size limit set by community restrictions, the clients wanted the minimise the home's appearance on a street of predominately low residences.

"At 2,960 square feet (275 square metres), the entire house is just under the maximum development allowed on the lot," Design Hound principle Kevin Stewart told Dezeen. "However, the client specifically requested a home that would not be visually overpowering/massive and would lend itself toward a more timeless design sensibility."

The black roof helps to give the home a low profile. It slopes down from a ridge onto the facade as a triangle, covering the upper floor.

The architects further strengthened the illusion of a one-storey residence by setting it back further from the street than its neighbours.

By cladding the exterior walls in blackened wood siding and white stucco, the firm wanted to give the home a refined exterior.

"The charred wood, which has a light grey stain applied to it for a more elegant look, was selected as a starting point," Stewart said. "The white stucco was then selected as a neutral, timeless contrasting material that would lend more focus to the wood."

The wood was prepared using shou-sugi-ban, a traditional Japanese method of charring that makes wood more resistant to the elements and giving a distinctive black aesthetic. Other Austin homes with cladding created using this technique include a prefabricated extension to lakeside bungalow and a rustic hillside home with modern interior.

In the Indian Trail House, two faces that make up the north facade turn back towards the house near the centre line. The architects filled the resulting niche with glass, which reaches from the ground to the roof, where it expands into a large window sculpted into first floor.

The dark threshold rests in the glazing. The architects extended the pattern of the door vertically past its frame. The appearance of a larger entryway enhances the overall illusion of a smaller home.

Inside the residence, a combined kitchen, dining room and living room make up an open space to the left of the entryway.

The private quarters are split between the two floors. At the south end of the lounge, a staircase offers access to bedrooms above. A pocket door conceals entry into the master bedroom, guest suite and study at the south section of the ground-level plan.

The layout accommodates two private outdoor spaces. The guest bedroom, the lounge and the northern garage encircle a communal courtyard. The master bedroom leads out to a personal covered terrace.

"The seclusion of the courtyard was of utmost importance to our client's and that is fairly difficult to accomplish with a typical interior residential lot," said Stewart.

"Luckily, the adjacent house was limited at the rear by a protected tree on their lot so we were able to determine sight lines from that home and maximise exposure to the protected tree as well as views to the west."

By separating the floor plan into private and communal areas, and by providing for private terraces, the architects intended the house to evoke a sanctuary.

The interior adds to the atmosphere of restful seclusion. The monochrome interior accented with walnut was chosen to evoke tranquility, while soft natural lighting aims to augment the calm.

"Once inside, the white palette with a few other materials used as accents creates a serene/spa-like mood," said Design Hound. "Lots of indirect daylighting via hidden clerestory windows into light-wells and windows along the bottom of walls eliminates the harsh light associated with direct sunlight."

Other houses in Austin include a waterfront cottage amid cypress trees and a self-made home clad in hide-like cement panels.

Exterior photography is by Merrick Ales, while images of the interior are courtesy of
Molly Culver Photography. 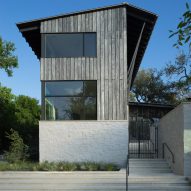