Former first lady of the United States, Michelle Obama, will give a keynote speech at this year's AIA National Convention in Orlando – following a protest over the lack of female speakers for the event.

Last week the American Institute of Architects (AIA) announced Obama's inclusion in the programme for the Conference on Architecture, which will take place at the Orange County Convention Center from 27 to 29 April 2017.

Several women have been added to the line-up for this year's event since the AIA faced criticism over the gender balance.

In February, over 50 architects and firms wrote a letter expressing their "outrage" that of the seven confirmed keynotes at the time, only one was a woman.

Diller Scofidio + Renfro co-founder Elizabeth Diller, Perkins+Will associate Eve Edelstein and architect Cheryl McAfee are among those that have now joined author and Harvard professor Amy Cuddy on the list of speakers. 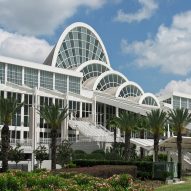 Obama served as first lady during her husband's two terms as president, which came to an end earlier this year. During her tenure, she launched initiatives aimed at tackling childhood obesity and encouraging young women to enter higher education.

"Over the last eight years while in the White House, former first lady Michelle Obama has worked tirelessly to champion a number of important initiatives designed to make our world a better place," said the AIA.

Obama is also a Harvard-trained lawyer, and held positions at the University of Chicago.

The topics of her AIA keynote are yet to be disclosed, but she has become renowned for the impassioned speeches given while campaigning for Hilary Clinton during the 2016 presidential election.

The organisation faced a backlash following his election victory, after pledging to work with him to improve the country's infrastructure, and issued an apology shortly after.