Leaders of the American Institute of Architects have issued an apology after their statement supporting President-elect Donald Trump caused outrage across its community.

AIA executive vice president and CEO Robert Ivy and national president Russ Davidson released a joint video in which they admitted that their post-election memo was "tone deaf" and "resulted in hurt and anger by too many people".

"The message that went out was a mistake, and it shouldn't have happened," said Davidson in the video, while issuing reassurances that the organisation is committed to tackling issues surrounding diversity, equity, inclusion and climate change.

The duo's statement, sent out shortly after last week's shock US election result, pledged support for Trump on behalf of its 89,000 members:

"The AIA and its 89,000 members are committed to working with President-elect Trump to address the issues our country faces, particularly strengthening the nation's ageing infrastructure. During the campaign, President-elect Trump called for committing at least $500 billion to infrastructure spending over five years. We stand ready to work with him and with the incoming 115th Congress to ensure that investments in schools, hospitals and other public infrastructure continue to be a major priority.

"We also congratulate members of the new 115th Congress on their election. We urge both the incoming Trump Administration and the new Congress to work toward enhancing the design and construction sector's role as a major catalyst for job creation throughout the American economy.

"This has been a hard-fought, contentious election process. It is now time for all of us to work together to advance policies that help our country move forward."

Many architects, academics and organisations fired back fiercely, writing open letters and taking to social media to express their anger at the AIA's decision.

Among those to voice their condemnation were Michael Sorkin, The Architecture Lobby and several local AIA chapters, using #NotMyAIA on Twitter.

Architect Fritz Read from the AIA Baltimore chapter has resigned from the organisation in protest.

The editorial board of US-based magazine The Architect's Newspaper also released a response to the statement, which Ivy and Davidson replied to earlier this week:

"We recognise that the current, post-election environment is unique and has aroused strong and heartfelt feelings within all communities, including that of AIA membership. In this context, our recent statement in support of design and construction's future role with the new administration has been viewed with concern by a number of our colleagues.

"The AIA, a bipartisan organisation with strong values, reasserts our commitment to a fair and just society and also respects the right of each member to his or her political beliefs, knowing that we are all united in our desire to contribute to the wellbeing and success of our nation and our world.

"The AIA remains firmly committed to advocating for the values and principles that will create a more sustainable, inclusive and humane world. The spirit and intention behind our statement is consistent with and in support of President Obama's eloquent call for us all to unite for the best interest of America's future." 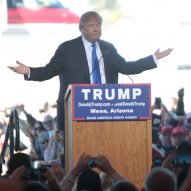 "Forget infrastructure. How Trump would solve an algebra problem is unclear"