Dishevelled surfaces and industrial details create a shabby-chic aesthetic at this hostel in Chicago, where guests are encouraged to interact with each other via Instagram before their stays.

With interiors designed by French studios Ciguë and Delordinaire, The Hollander offers both private and shared rooms within a five-storey 1905 building in the city's Wicker Park neighbourhood. It is positioned directly over the Damen station on the L Metro line, which connects O'Hare Airport with Downtown Chicago.

Operated by Grupo Habita, the hotel is the first to facilitate the Mexican company's Social Stay programme that allows guests to connect on Instagram ahead of arrival.

"The Hollander's integration with social media forges a community where the most-digitally connected travellers can meet and share their adventures during their stay," said the group.

Ciguë and Delordinaire chose to strip back the paintwork on the lobby walls, exposing brickwork and rough textures.

These surfaces contrast with the large glass panels that face onto the street, and also form a buffer space around the entrance.

At the back, a long wooden table acts as a coffee counter at one end, and provides a place for eating and working at the other.

A total of 66 beds are split between 12 private rooms and eight shared rooms, all of which have en-suite bathrooms.

A pared-back palette of greyscale tones and timber creates a minimal feel in the dorms.

Bunk-beds built from wood panels are suspended from black floor-to-ceiling poles, which match the ladders used to access the higher sleeping spaces.

Private lockers for storing bags, simple benches and bedside tables are all built into the rooms. Black accessories like lamps and coat hooks stand out against the white walls.

Most of the furniture was custom-designed by Delordinaire, although stools by Swedish brand Massproductions are found in the lobby and bucket sinks by Alape feature in the bathrooms.

Delordinaire was founded in 2015 by architects Adrian Hunfalvay from Australia, Erwan Lêveque from France and Jean Philippe Parent from Canada, and has offices in both Paris and Montreal.

The firm also recently completed a small winter cabin raised on stilts above the Quebec countryside.

Paris-based Ciguë was started in 2003, and has since become a favourite of skincare brand Aesop – designing several of its stores in the UK and France. 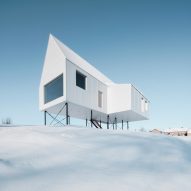