Reclaimed brick walls help this home of modest proportions blend with its historic context in London's Clerkenwell, where it stands on top of a former 19th-century prison.

Phil Coffey's London-based team cleared away a caretaker's shed on the site to create the house for architect Selim Bayer of Istanbul-based Flat C/ Architecture. It now stands directly on top of the prison vaults of the Clerkenwell House of Detention, which dates back to 1847.

Tucked away from the road and set in the shadow of the Grade II-listed Kingsway Place apartment block, the residence is named Hidden House after its secluded location.

The architects selected reclaimed London stock brick for the external walls in reference to the surrounding architecture, and topped a flat roof with a series of generous skylights that help to ensure the house is brightly lit despite its overlooked setting.

"Hidden House is a series of internal spaces constrained in plan by a listed perimeter garden curtilage and held in section by a series of floating ocular rooflights," said studio founder Phil Coffey.

"Residents enjoy the light-filled void space in between these elements, a space heightened in tension by the seemingly effortless roof structure which is concentrated to a point floating above the main living space, defining zones within for use," he continued.

"This special place is hidden, part building, part garden, mostly sky. It's difficult to find, but well worth the effort."

The angular lightwells, which funnel in towards the roof, create a chequerboard effect across the ceilings of the oak- and polished concrete rooms within.

"From anywhere in the house, you are able to gaze at the skies; which evokes a very pleasant feeling of presence, where the intimate scale expands beyond the confinements of the space," said Bayer, referring to the 72-square-metre plan of the single-storey residence.

Concealed storage is integrated into the oak panelling to create a clean aesthetic, and a unit built around a wood-burning stove in the open-plan living space is made from the same polished concrete as the flooring.

A large window frames the blackened flue of the stove, which transitions to untreated metal at it passes through the roof and aligns directly with a chimney.

"Given the small plot of land, high-profile neighbouring buildings and proximity to Clerkenwell's vibrant business and design district, the building presented a constrained brief," said the studio, where architects Ella Wright and Lee Marsden led the project team.

"Of the utmost importance was the retention of privacy whilst maximising light and space."

The living space, as well as the property's two bedrooms and bathrooms, are finished with bespoke oak furniture to match the panelling.

Underfloor heating installed beneath the concrete slabs, which hold the warmth throughout the day, take the place of radiators to maximise the limited floor plan.

This is one of a number of sustainability measures taken across the house. Full-height sliding glazing, alongside the openable rooflights, allow the space to be passively cooled.

The floor-to-ceiling sliding windows and doors also open the house to a shared garden at the west and a private patio to the north.

Hidden House has been shortlisted for a RIBA Regional Award 2017.

Coffey Architects, which placed at 141 on the Dezeen Hot List, has previously designed a library with a perforated facade for London's Science Museum and a mews home referencing Japanese tea rooms. 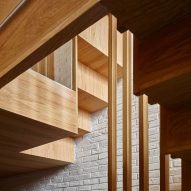