Colourful blown-glass totems by Luca Nichetto are among the works in Decode/Recode, Venetian glassmaker Salviati's exhibition at Milan design week.

Exploring the potential of modular glassware, each of the illuminated objects is made from several stacked pieces.

Named Pyrae, the installation features 53 totems made from different combinations. Some sit on vase-shaped bases, while others are supported by small half-domes. Some elements are finished in milky colours, while others feature patterned or ridged exteriors.

To create the collection, Nichetto first designed a set of 25 base modules, which were then made using one of ten traditional techniques, in 15 colours. This made for thousands of possible unique combinations.

"A fascination for the depiction of human forms through culture and history – for the idea of character – here materialises in 34 different objects," said Nichetto, who created his first piece for Salviati when he was 23.

The designer has also worked with Claesson Koivisto Rune and created modular lighting for Hem.

"Exploring the expressive potential of Salviati glass, we used colour and technique to design simple modules that, combined, introduce the possibility to create more than 10,000 unique and original figures, no one the same, each one beautifully proportioned."

According to Salviati, which has been working with traditional Murano glass for over 150 years, the exhibition is intended to explore how centuries-old methods can be combined with contemporary aesthetics.

It's also an experimentation into the different ways glass can be adapted to form modular objects.

Salviati has also partnered with Ben Gorham, founder of fragrance and accessory brand Byredo, on a second piece, named Strata. Gorham created mini carousels of glass panels, which were then hung alongside and above each other to create a trio of illuminated towers.

"Because of the qualities of glass, we could develop the concepts of stackability and layering," said Gorham, who set up Byredo in 2006.

"The interaction of each piece determines variations in colours, textures, figures: it was natural to think how glass interacts with other parts and with the light."

Decode/Recode is on display at Ventura Centrale, a new Milan design week district located around the Central Station. The exhibition is on from 4 to 9 April on Via Ferrante Aporti 19.

Also on within the new district is Lee Broom's Time Machine, for which he filled a modernist-inspired carousel with products he has designed over the past decade. 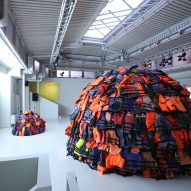