The company collaborated with students from London's Royal College of Art (RCA), Lausanne's École cantonale d'art de Lausanne (ÉCAL) and Design Academy Eindhoven (DAE) to create bikes in response to the specific needs of their cities.

The students were challenged to create vehicles that would make cycling both more appealing and more accessible, depending on the different challenges of each place.

The RCA team aimed their electric bike at London's growing number of co-working spaces, creating a product that offices could lend out to workers. To help discourage would-be thieves, the saddle hides a battery that needs to be detached and brought in for recharging.

A built-in navigation system also helps point riders in the right direction, and a front-mounted tray offers plenty of room for bags.

Students from ÉCAL took a slightly different approach, adapting their bike for the city's steep hills. Its motor collects energy from downhill journeys, and stores it for the more challenging upward climbs.

DAE's bike is aimed at the Dutch tendency to ride two to a bike, with a longer bench-style seat that lets a pair sit comfortably together. Footrests offer some extra support, and a side-stand is on hand to turn the cycle into what the students call "instant street furniture".

Punkt has worked with students before, showing a series of everyday household items updated by designers at ÉCAL during Milan design week 2016.

"Once again, an educational collaboration project has led to some very inspiring designs," said Punkt's president Petter Neby. "A new feature this year has been the team-based format. This has given the students useful experience in the realities of real-world employment in a commercial design studio."   

The RCA, DAE and ÉCAL ranked first, third and fifth respectively among schools in Dezeen Hot List in 2016.

Prototypes of the bikes were on display at the Palazzo Litta on Corso Magenta during Milan design week, from 4 to 9 April.  Other highlights from the design fair include an exhibition of designers' personal items installed by Airbnb in Leonardo da Vinci's 15th century home, and an igloo built by 16-year-old artist Achilleas Souras using lifejackets abandoned by refugees. 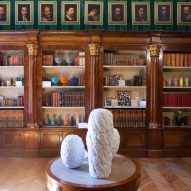