Edward Enninful has been named as the new editor of British Vogue, making him the first man to take the helm in the fashion magazine's history.

Enninful was announced as the new editor yesterday and will take over from Alexandra Shulman, who announced her departure in January.

The 45-year-old, who is currently the fashion and creative director at W Magazine, will start his new role on 1 August 2017.

In a statement announcing his appointment, Jonathan Newhouse – chairman of Vogue publisher Condé Nast – described Enninful as one of the "most talented and accomplished fashion editors in the world" and said he was "supremely prepared to assume the responsibility of British Vogue."

Born in Ghana, Enninful moved to London as a child. His first foray into the fashion industry came at 16 years old when he was scouted by a modelling agency.

Soon after, he became friends with i-D magazine founders Trish and Terry Jones and started assisting the publication, eventually becoming the youngest ever fashion director for an international publication, aged 18.

His most recent accolades include the Isabella Blow Award for Fashion Creator at the British Fashion Awards in 2014, as well as being appointed Officer of the Order of the British Empire (OBE) for his services to diversity in the fashion industry.

Enninful was reportedly in the running for the editorship alongside Jo Ellison, fashion editor of the Financial Times, and Emily Sheffield, who is currently deputy editor at British Vogue.

Known for his bold editorial style, Shulman said she expects Enninful to bring a "new creative aesthetic" to the magazine.

"Edward is an exceptionally talented stylist who will no doubt bring an exciting new creative aesthetic to the magazine," said Shulman in a statement.

"Every Vogue editor arrives with their own range of talents and experience and Edward is very known, respected and liked within the fashion industry."

Vogue is widely considered the most influential fashion magazine in the world. It was founded in 1892 in the United States, while British Vogue launched in 1916 as its first international spin-off. 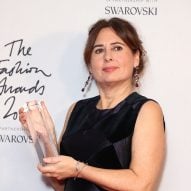