The prominent editor-in-chief of British Vogue, Alexandra Shulman, has announced she is departing the magazine after a quarter of a century at the helm.

Shulman, who entered the role in 1992, is the longest serving editor in Vogue's international history.

As well as steering the Condé Nast title into the digital age, she oversaw Vogue's centenary last year.

"Alex has been the longest serving and most successful editor of Vogue in its 100-year history," said Condé Nast Britain managing director Nicholas Coleridge, who is himself departing in August. "She has edited the title for a quarter of its existence, through its period of highest-ever circulation, and its simultaneous transformation into a global digital brand."

"It is impossible to sufficiently express the contribution she has made to Vogue, to Condé Nast and to the British fashion industry."

Shulman – who will depart her role in June this year – previously worked at Over-21 magazine, Tatler and the Sunday Telegraph before joining British Vogue as features editor in 1988.

She started as editor-in-chief in 1992 after a brief interlude at GQ. 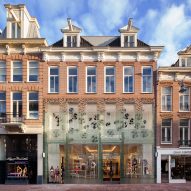 Chanel, COS and Dior revealed as fashion names that Dezeen readers care most about

"It was difficult to decide to leave but 25 years is a very long time and I am tremendously excited that I will now look forward into a different future," Shulman said in Vogue, "but I know that nothing will be quite like the years I have spent at Vogue."

"Nicholas Coleridge and [Condé Nast International chief executive] Jonathan Newhouse have given me the space to edit this important magazine in exactly the way I wanted to and for that, and of course the opportunity in the first place, I am tremendously grateful."

The news of Shulman's departure was, naturally, reported by Vogue. Her successor is yet to be announced.

Vogue is widely considered the most influential fashion magazine in the world. It was founded in 1892 in the United States, while British Vogue launched in 1916 as its first international spin-off.