Architects of Invention references one the seven wonders of the ancient world with this design for a residential development in Birmingham, England.

Based on the fabled Hanging Gardens of Babylon, the Garden Hill proposal comprises two modular 25-storey towers arranged in a parabolic formation with planted rooftop terraces in between.

Approximately 500 residential units measuring between 40 and 75 square metres will be accommodated within the geometric structure, which steps down towards the centre to reduce the building's overall mass.

The layered configuration will enable terraces and gardens to be positioned on the roofs of the units, creating accessible private or shared outdoor spaces for all residents.

The architects said inspiration for the "oasis-like residence for Birmingham's growing, multicultural population" came from the verdant terraces of the Hanging Gardens of Babylon.

Architects of Invention, which has offices in London, Moscow and Tbilisi, was invited by Chinese private equity fund PGC Capital to develop the design concept for the Digbeth area to the east of Birmingham's city centre.

The popular creative neighbourhood is set to benefit from regeneration linked to the implementation of the HS2 high-speed train service connecting Birmingham with London.

The two staggered towers will located at opposite corners of a site alongside the busy High Street Bordesley.

The different aspects from the two towers will ensure that the terraces receive direct sunlight throughout the day, with the southern tower catching the morning sun and the northern units becoming more exposed in the evening.

Spaces at street level could accommodate retail units, with additional facilities for the community and co-working areas occupying the remainder of the podium.

Apartments will be spread throughout the two towers, which could be topped with gardens for use by residents as well as the public.

"The proposal suggests a new model for live, work and play," said the architects, "where the units are small but there are large shared facilities for communal living and working, including music recording studios and small rental units for startups." 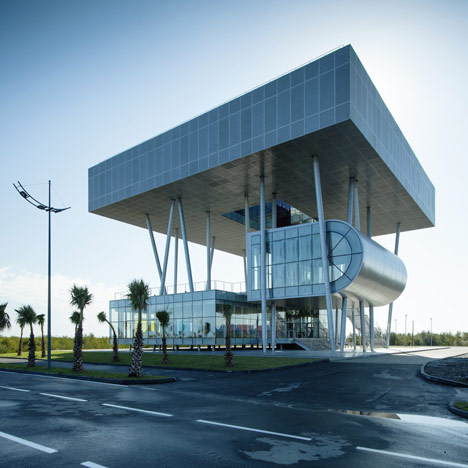 Lazika Municipality by Architects of Invention

The architects have proposed the building be constructed almost entirely using cross-laminated timber to improve its sustainable characteristics.

The £70 million scheme is currently at pre-application stage, with Birmingham City Council's planners assessing the proposals.

Architects of Invention has previously completed several projects in Georgia, where one of its principals, Nikoloz Japaridze, was born. These include a public services building on stilts and an Olympic Museum with a twisting veneered staircase.

More by Architects of Invention