These pendant lights unveiled by New Zealand brand Resident at Milan design week are made of separate LED-rimmed rings that link together like a chain.

In development for several years, the Circus pendants are made of interconnected brass circles that can be scaled up to form long vertical pendants.

Created by the brand's in-house design team, Resident Studio, each ring is encircled with an LED light source that casts a warm glow.

"My thinking was that the circle was the most simple form, and how we could use this en masse to create striking vertical decoration," said Resident co-founder Scott Bridgens, who set up the brand in 2011 with partner Simon James.

As well as releasing products created by its own studio, the company has partnered with designers including Philippe Malouin and Jamie McLellan.

"This is a light that wouldn't have been possible without LED," added Bridgens. "We've developed a revolutionary plug-and-play system. The ring above will share power with the ring below and vice versa, and with that we have a never-ending chain of light."

Owners can adapt the light by adding or removing rings. Created for both commercial and residential interiors, the Circus collection showed at Resident's Dark Matter exhibition at the Euroluce lighting fair during Salone del Mobile from 4 to 9 April.

Also on display at the exhibition was Tim Rundle's Bloom pendant, which is based on the shapes of traditional paper lanterns. The London designer paired a mesh core with a frosted glass shade to create patterns inside the light. 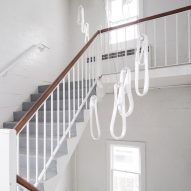