To create the pearlescent lighting, long sections of glass are pulled out and folded back on themselves as they cool. By doing this air is trapped in the loop, creating a grainy, textured effect.

The process is highly precise, requiring the glass to be at an exact temperature to create and trap bubbles. The sections are folded back on themselves at least ten times, each time capturing extra air and making the glass appear more pearlescent.

"This technique we developed is true to the intrinsic properties of glass in a fundamental way," said Arbel, who recently designed a lighting installation for London's Barbican.

"It is extremely simple in concept and yet requires tremendous sensitivity and skill on the part of the glassblowers to execute well."

Arbel uncovered the process while on a residency at Pilchuck Glass School, seeing master glassblowers do "tricks". After seeing the craftsmen gather and spin glass very quickly on a concrete floor – turning it into an opalescent blob – he had the idea of stretching glass to recreate the effect.

"We realised the same could be achieved, and with a lot more control and grace, if we folded the glass using the same motions that taffy or noodle makers use," he explained. "From there it was a process of experimentation and refinement over several months."

The lighting has an LED embedded in one end of the loop, which casts light down the length of the glass and emphasises the gradient. Each loop is hung from a simple pendant, which is suspended by two wires.

Bocci will launch the 87 Series along with three other new lighting designs at light fair Euroluce, which is on from 4 to 9 April during Milan design week. Other products to be shown in Milan include a marble grandfather clock by Lee Broom, a set of jellyfish-like silicone vases by Nendo and a collection of crocheted furniture intended to support out-of-work women. 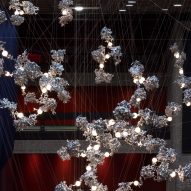