A screen of decorative terracotta blockwork fronts this apartment block in Ho Chi Minh City by Sanuki Daisuke Architects, which features planted courtyards in its centre.

Diamond and floral motifs are cut through the terracotta facade fronting the Apartment in Binh Thanh, which is named after a district in the Vietnamese city.

The material is hugely popular in Vietnam, with other local studios including Vo Trong Nghia Architects using perforated blocks for projects including a showroom in Hanoi to help filter the strong sunlight.

The local architects wanted to make the most of the open space in the high-density area by offering the residents access to an outdoor area.

"On initial inspection of the site, we felt that there is much potential due to: remaining urban open space or void created haphazardly in the crowded city," said the architects, who also recently completed a terrazzo-covered house in Ho Chi Minh.

"Therefore, on careful consideration, we concluded that this open 'urban' space can be utilised to design both an attractive and well-designed open-spaced building harnessing the natural daylight and wind," they continued.

Two towers placed at either end of the long and thin plot are occupied by the housing, while gardens planted with trees are placed between.

A courtyard spanning the first floor level above the garden is punctured by two large voids with trees growing up.

"A lot of outside space enhances occupants' living style with a deep connection to the outdoor found in tropical areas," said the architects.

"In the outside space, we planted a lot of greenery, making use of the natural abundance of natural daylight and natural ventilation, creating an enjoyable outdoor space."

Each of the apartments open to covered terraces that overlook the courtyard, helping to bring in plenty of natural light and further aid air flow.

Inside, the flats feature open-plan bedrooms, lounge and kitchen spaces. In one of the residences, an extra study space is squeezed into a nook.

Exposed concrete ceilings and white painted walls are offset by wooden finishes like the kitchen cabinets and the bed stands used throughout. 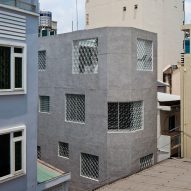