The Swift stool was shown at Cassina's 90th anniversary exhibition, Cassina 9.0, at Milan design week. It demonstrates a design approach that the architecture office – which is led by Italian architect and MIT professor Carlo Ratti – calls "implicit programming".

The approach sees the team use digital design and fabrication methods to tailor an object so it can take different preset forms.

In the case of the Swift stool, this is enabled through an elaborate system of individually designed joints and hinges that allow the stool to snap into its various positions.

The 27 rounded wood elements of the chair can sit in a flat, comb-like shape against the wall, and then be flipped around to form a seat with various leg configurations.

Carlo Ratti Associati describes the product as a kind of "programmable wood".

"Swish has been the culmination of a very exciting research path for us," said Ratti. "We started working on self-assembly and implicit programming – the possibility for an object to assume predetermined, kinetic configurations – a few years ago."

"How can we use mathematically controlled geometry to 'teach' a given material how to behave? Swish is the first implementation of such a principle to a very basic piece of furniture: a stool."

Ratti, who directs the Senseable City Lab at MIT, frequently works with emerging technologies. His other projects have included traffic infrastructure for driverless cars, smart modular seats that can be reconfigured with hand gestures, and offices where heating, lighting and cooling systems follow occupants around the building.

His architecture practice has been working with Cassina since 2013, when they collaborated on a series of prototypes called Our Universe.

The wooden elements of the stool were then milled on computer numerical control (CNC) machinery in Italy.

Four versions of the prototype – three in cherry wood and one in elm wood – were on display during Milan design week, where the Cassina 9.0 exhibition ran from 4 to 9 April at the Fondazione Giangiacomo Feltrinelli on Viale Pasubio 5.

Cassina also launched several new products during the event, including a sofa by Konstantin Grcic that borrows from the design of the Milan Metro.

However, the week was not entirely positive for the brand, as it was also slapped with an injunction to stop producing a Gio Ponti chair licensed to Molteni&C. 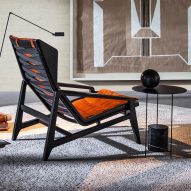