A subway-inspired sofa is among designs by Konstantin Grcic, Philippe Starck, the Bouroullec brothers and Patricia Urquiola to be launched by Cassina at Milan design week.

Grcic turned to both the history of Milan and Cassina to create the Soft Props sofa, which foregoes a traditional backrest in favour of a steel pipe that runs around the seats.

The pair used strips of colour to guide travellers through the subway, linking them with architectural details – such as the rounded bright red railings for Line 1.

The steel pipe also references the railing used in transatlantic ships furnished by Cassina in the 1950s. According to the brand, it outlines the sofa and creates a "protective boundary" for the space it occupies.

The Soft Props sofa – a development of Grcic's Props series, released as part of Patricia Urquiola's first collection as art director at the brand – is made of large loose cushions that can be rearranged into various configurations, depending on the space.

The rail is also made of interchangeable parts, which are fixed together with invisible joints inside the tube – again allowing the user to rearrange.

"I wanted to make a piece of furniture that is spatial, something more abstract, without compromising comfort," said Grcic, who took 100th place in the Dezeen Hot List. The designer has created furniture for brands including Vitra, Magis and Mattiazzi.

The sofa, which comes in leather or fabric upholstery, is intended for domestic environments, but Cassina hopes its modular elements will also work in public areas as encouragement for people to interact and communicate.

Also part of Cassina's 2017 collection is Patricia Urquiola's asymmetric Floe Insel sofa, which is designed to evoke the irregular forms of ice. A section of the sofa juts out at one end, and diagonal stitching that runs across the cushions has been added to emphasise its angular shape.

The new collection also marks Cassina's first collaboration with Ronan and Erwan Bouroullec, who have designed furniture that blends the hard features of a dining chair with the soft elements of an armchair. The Cotone sits on an aluminium framework, which is contrasted with an upholstered seat and arms.

Their Baleno shelves – which are designed to be arranged in groups – are made from soft thermoplastic that bends under the weight of books. Starck has expanded on his Caprice and Passion chairs, designing a bar stool version of each that sits on a single stem-like support.

The furniture will be showcased at the Cassina showroom on Via Durini throughout Milan design week, which began yesterday and runs until 9 April.

It will also be shown at the Fondazione Giangiacomo Feltrinellie on Via Pasubio 5, where the brand will be showing a new book examining the future of interiors. The monograph, entitled This Will be the Place, examines behavioural trends and their possible effects, via a series of interviews with architects, artists and designers.

Several other furniture collections are being shown during Milan design week, including a set of steel-framed tables with a "strong graphic presence" by Alain Gilles and an Emeco chair made using recycled aluminium by Jasper Morrison. 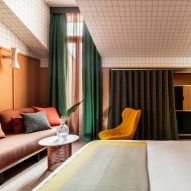