Former US first lady Michelle Obama has urged architects to consider working on more community projects in poorer city neighbourhoods, during her keynote at the 2017 AIA conference this week.

In her first public appearance since leaving the White House, Obama called on American architects to focus efforts on work that will benefit those in low-income city districts, on top of financially profitable commissions.

"Yes there are the projects that happen downtown – that important building, that important park – but there's also those community centres, those parks and district facilities, the homes, the opportunities that you have to make a neighbourhood beautiful for a family or a child that feels like no one cares," she said.

"So I would urge you all to think about that, as you look at the next project that you take."

She said that because limited funding for civic infrastructure and facilities usually goes to improving inner-city and downtown districts, residents of outlying areas have been left with "crumbling" schools, and spaces that feel "like another planet".

"When you run out of resources, who's the last to get the resources? The kids outside the circle," Obama said.

Having spent a chunk of her career working in the City of Chicago's planning and development department, the former first lady and trained lawyer said that more consideration of the costs involved in keeping urban areas pleasant is necessary.

"Cities are a complex, big, messy enterprise. And they're expensive," she said.

"To have a city with millions of people – with dense populations, great architecture, economic development, commercial development – and when you think about what it takes to run a city – the infrastructure, pot-hole repairs, traffic safety, you name it... it is expensive. It takes an investment."

"If we're going to have cities, then we have to invest," she said. "Which means you have to pay taxes, and we have to know that it requires money."

During her talk yesterday, Obama also spoke about the presidential library that she and her husband Barack are in the process of developing.

Architects Tod Williams and Billie Tsien were selected for the project in June, and the site in Chicago's Jackson Park neighbourhood – close to where the Obamas grew up – was announced a few weeks later.

"We have spent a lot of time looking at structures and models," said the former first lady. "[Tod and Billie] have been phenomenal... They've been getting to understand the South Side of Chicago, because that is our home town."

"This project means the world to me and knowing that we have architects that appreciate the whole project and not just what the building looks like – which is important, but it's a building that's sitting in a neighbourhood," she continued.

"So we have been blessed to have architects who are thinking about the big picture of what buildings mean in the lifeblood of a community."

Obama's 45-minute discussion with American Institute of Architects (AIA) president Tom Vonier also touched on race and gender parity in architecture, life after the White House, coping with being a working mother, and her reluctance to run for office – as she believes she can do more good away from the political spotlight.

The 2017 AIA national convention is taking place from 27 to 29 April at the Orange County Convention Center in Orlando. Obama was announced as part of the lineup following a protest over the lack of female speakers for the event. Other keynotes on the first day of the conference included architects Alejandro Aravena, Diébédo Francis Kéré and Elizabeth Diller. 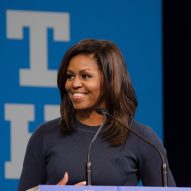