Rows of perforated aluminium shades intended to represent the feathers of an eagle shield the facade of this concrete and glass church in the Taiwanese city of Tainan.

Tainan Tung-Men Holiness Church was designed by local studio MAYU Architects for a site surrounded by residential buildings in the city on Taiwan's southwest coast.

The architects said building was prompted by an epiphany experienced by the church's pastor, which also directly influenced the symbolism applied throughout the design.

"This project originates from a vision that the pastor received from God," said MAYU Architects. "[The church] symbolises an eagle as a biblical metaphor and is like an airport, serving as a boarding gate for non-believers to enter into God's kingdom."

Spaces on the building's ground floor and basement level are dedicated to public functions including a coffee shop and a bookstore, which serve to invite the public into the church.

The concrete building features a glazed facade that enhances its connection with the surrounding neighbourhood.

Metal screens fixed in front of this surface are twisted to soften the church's appearance and create a flowing effect intended to resemble the soft and flexible feathers of a bird.

"The aluminium perforated screens or 'feathers' on the church exterior pay homage to the eagle metaphor, connecting this contemporary architecture to the members of the church on the emotional level," said the architects.

"Looking out from inside, the feathers form a sheer fabric that presents the secular world outside in a different light."

The orientation of the screens is based on the mathematical Fibonacci sequence and each panel is rotated by two degrees in relation to its neighbour to create a smooth, twisting surface.

To one side of the building, a glass-lined concrete staircase that ascends from the public spaces to the prayer areas above provides a bright and tranquil circulation route.

The top of the tower features a folded glass form that frames views of a large white cross outside as visitors ascend towards three prayer rooms on the church's highest floor.

The first floor contains a small sanctuary, the pastor's office and a pair of classrooms, with the main sanctuary on the next level.

The sanctuary is housed in a double-height cast-in-situ concrete box featuring wooden flooring that provides a warm contrast to the cool, smooth surfaces of the walls.

Soft light filtered through the perforated screens illuminates the space, which has a raised stage at the front and a wooden cross suspended in front of the windows.

A cantilevered oak staircase at the rear of the sanctuary leads up to a mezzanine level through a narrow opening lined with a vertical window that connects seamlessly with a skylight.

The sanctuary space is overlooked by additional seating on the mezzanine level and by a window in the adjacent nursery area. 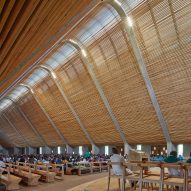 John McAslan + Partners and Triad Architects recently collaborated on a cathedral on the edge of a tea plantation near Nairobi, which also incorporates louvers into its design.