The Calliope pendants, which were shown at Milan design week, are designed to work as an adaptable system. They can be clustered together or placed singly.

The lights feature a range of shades in rounded shapes – from perfect spheres to squashed circles and elongated ovals – which can arranged on top of one another. Tassels at the base further echo the form of paper lanterns.

"We designed this lighting system to be poetic," said Wanders, who is also the co-founder of Dutch brand Moooi. "It captures attention as it inspires the imagination."

The Calliope lighting shares its name with the Greek mythological muse who inspires epic poetry.

The pendants, which are made from both opaque and transparent hand-blown Murano glass, can be scaled up to cover an entire ceiling or function as a lighting installation for a room. They hang from fine wires, designed to be almost invisible from a distance.

"Marrying an element of ancient Asian culture with free-moving parts has resulted in a product that embodies both classic and contemporary design," added Marcel Wanders Studio creative director Gabriele Chiave.

The Calliope lamps were shown as part of Wonderglass's Between Light and Time installation at Istituto dei Ciechi in Milan, which also included lighting by Hideki Yoshimoto, Zaha Hadid and Dan Yeffet.

Other lighting to debut at Milan design week this year included a Formafantasma lamp that used the power cord as a sculptural element, to pendants by New Zealand brand Resident that connected together to form a chain. 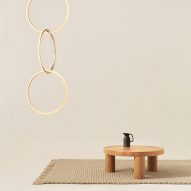