A group of design graduates and coders have created a spoof version of Dezeen that uses artificial intelligence to write comments about projects.

"We created a comment on commenting," the designers told Dezeen. "The contrast between Dezeen's highly curated articles and the uncontrolled, blunt and often vicious users' comments sporadically sparked our interest."

Dezeen Bot List works by generating comments about images taken from Dezeen, which are selected by visitors to the site. It uses artificial intelligence to combine words and phrases from genuine comments on Dezeen stories.

The bot reads the comments aloud as it types them, creating an often nonsensical design discussion.

"We appropriated the format of the chat bot, and used machine learning to teach an algorithm to speak its mind and generate new comments based on the language of real commenters," they explained.

"The bot responds to Dezeen images that have been filtered through image classification software, which tags images so help the bot recognise them."

The project coincides with increasing concern about the role artificial intelligence plays in the way people consume information. Targeted filtering and "fake news" are thought to have had an impact on recent elections in the UK and the USA while last year a chatbot developed by Microsoft started generating racist comments and was quickly shut down.

"Media narratives are constructed though and influenced by algorithms such as image classification, Facebook's newsfeed, Google ranking etc," the group said, adding that these can "also have gender and racial bias embedded within them".

The bot list initiative formed part of Design Academy Eindhoven's #TVclerici project, a "mashed-up media and design studio" located in Palazzo Clerici in the centre of Milan during Milan design week. Through a schedule of live shows, the exhibition investigated the relationship between the worlds of media and design.

The Dezeen Bot List team presented their project in the form of a rap performance that used phrases generated by the bot as lyrics.

The project "questions how the format of commenting is being used on cultural media platforms by readers and the media itself", the team said.

Smeets' interview descended into farce when he said he was looking for someone to work at a new venture called Blow Job. The contestants left the stage while the audience cat called. 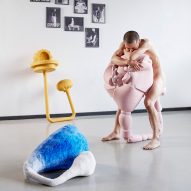 Dezeen Bot List takes its name from Dezeen Hot List, our index of the most newsworthy forces in design. Design Academy Eindhoven came third in the list's ranking of design schools.