New York gallery Chamber is hosting an domestic-focussed showcase that features work by only women designers – the second all-female exhibition to open in the city this week.

For her final exhibition in Chamber's Collection #3 series, curator Matylda Krzykowski has chosen to present newly commissioned, one-of-a-kind and limited-edition designs made exclusively by women.

A Room With Its Own Rules opened yesterday, just a few days after New York's Egg Collective debuted its Designing Women show that also brings together furniture, homeware and accessories only by women.

"After curating three shows at Chamber, I sought the fourth (and final) to focus on women," said Krzykowski. "This show presents designers, architects and artists from different backgrounds, skills and age – all having established their own rules in a market that is still man-dominated."

Krzykowski's previous three exhibitions were based on the 1956 collage by British artist Richard Hamilton, "Just what is it that makes today's homes so different, so appealing?".

But Show IV draws on his 1992 satirised update of the artwork, titled "Just what is it that made yesterday's homes so different, so appealing?" – in which a male bodybuilder is replaced by a female counterpart.

Krzykowski invited the women artists, designers and architects to create objects based on ideas of living spaces and desirability – many of which manifested as both functional and sculptural.

Themes of contemporary femininity and political protest are explored in many of the pieces. For example, Johanna Grawunder has created a glowing pink installation named Pussy Grabs Back, in reaction to US president Donald Trump's now-infamous taped comments about women in 2005.

The design also ties to the pink Pussyhats worn by those who took part in so-called women's marches worldwide, the day after Trump's inauguration, one of which has been added to the collection at London's V&A museum.

Others in the show include Åsa Jungnelius' row of giant lipsticks, designed to highlight the "power of lipstick as a tool and a weapon", and Katie Stout's pale-pink desk that nods to the power desks of successful women like fashion designer Diane Von Furstenberg.

"Many of the female designers, artists and architects I speak with today say that men are taking up a lot of space within the design-world, both literally and figuratively," said Kryzkowski, who also runs contemporary design gallery Depot Basel.

"But I believe we exist in a transformative time where women should claim this space."

Other highlights include the Fallen Rock coffee by Buro Belén, comprising a huge slab of rose quartz that squishes a soft velour-wrapped base in the same colour, and the Equals chair by Sabine Marcelis that combines block of cast polished resin with planes of tempered waxed steel.

Located in New York's Chelsea arts district, Chamber was founded in 2014 by Argentinian gallerist Juan Garcia Mosqueda, who was denied entry into the US earlier this year during what he described as a "dehumanising and degrading" ordeal. 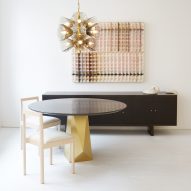