Young Architects Competitions is inviting designers to submit proposals for a complex of observatory houses, located in the grounds of Italy's Roccascalegna castle.

The ideas-based Observatory Houses competition tasks designers and architects with creating a "place of spirituality and meditation" for those wanting to move away from the busy, overcrowded cities.

Both professional architects and designers, and students are encouraged to enter the competition.

"Observatory Houses wishes to promote an architectural intervention that aims at becoming a destination for those who wish to move away from their everyday routine and live an archaic, almost mystic experience," said organiser Young Architects Competitions (YAC).

Designers are asked to find a clever way of integrating the Observatory Houses into their historic site, a medieval fortress in the Municipality of Roccascalegna.

The houses should also incorporate elements that allow for stargazing – the activity that led YAC to choose the Roccascalegna area as the focus for the competition in the first place.

"There are still places that are far from lights and cities where  the beauty of the infinite sky appears in its entire splendour," said YAC. 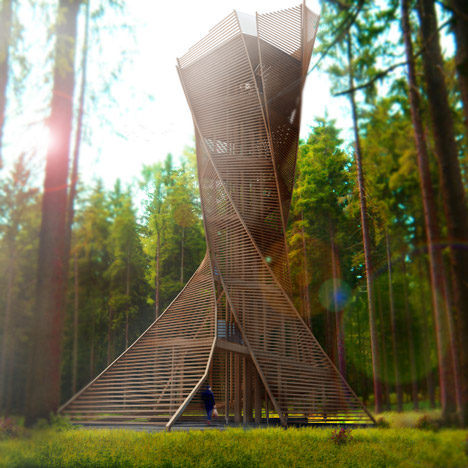 Twisting observation tower could be built in a northern Italian forest

" Surrounded by forests and crags, Roccascalegna is one of the places where this magic continues to occur and where the sky keeps on telling its eternal and beautiful story."

Entries will be judged by a jury panel made up of renowned architects, including Enrique Sobejano of Nieto Sobejano Arquitectos, HHF Architects co-founder Simon Frommenwiler and Snøhetta architect Felix Perasso.

Ten other finalists will receive an honourable mention, while an additional 30 finalists will be recognised by the jury for the quality of their designs.

All material and guidelines for the competition can be downloaded from the YAC website. Entrants must then register and upload their project.

Registration is available until 19 July and submissions are being accepted until 26 July 2017. Winners will be announced 25 September 2017.

Details about dates and prizes are listed below. For more information, visit the YAC website or contact the organisers.

All the awarded proposals will be transmitted to architectural magazines and websites and will be hosted in international exhibitions. All the finalist proposals will be published on the Young Architects Competitions website.