A mural by street artist Banksy has appeared in the English town of Dover, showing a worker chipping a star away from the European Union flag.

The four-storey artwork, located on the wall of a derelict building beside the major A20 road, went up overnight on Saturday. It depicts a man in overalls up a ladder, using a hammer and chisel to remove one of the EU flag's 12 gold stars.

Cracks starting at the centre of the eroded star stretch across the blue flag. Banksy confirmed the mural was his on Monday, sharing photographs of it on his official Instagram account.

Its appearance comes during the UK's continuing Brexit process. It also coincided with the day of the French elections, which saw the president-elect Emmanuel Macron face off against the far-right, anti-EU candidate Marine Le Pen.

Dover is directly across the channel from Calais, and the most commonly used port for ferries crossing into England from the French town – until recently home to the notorious Calais Jungle refugee camp. Calais remains a landing point for migrants seeking to make the journey to the UK.

While Banksy's work has been increasingly political, the mural marks the first time the British artist has commented on Brexit, despite 10 months passing since the EU referendum.

His most high-profile work in that time has been the Walled Off Hotel, a functioning "all-inclusive vandals resort" in Bethlehem, five metres from the wall that separates Israel from the Palestinian West Bank.

Previous works have included the temporary "bemusement park" of Dismaland in Somserset, the remains of which the artist eventually transferred to Calais. 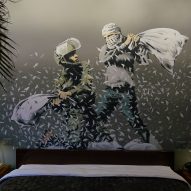 The UK's exit from the European Union has prompted a number of responses from designers and artists, who protested the referendum results with creative signs and shared satirical illustrations.

In the weeks after the referendum, more than 350 architects and designers signed Dezeen's Brexit Design Manifesto, which identified ways the design sector can help the UK maintain its vibrancy after Brexit, and listed areas of concern for the sector.