London studio Assemble and experience designer Nelly Ben Hayoun are among 10 teams commissioned to create "ground-breaking" large-scale public projects for the UK event that's been dubbed the Festival of Brexit.

The event, which has the working title of Festival UK* 2022, is pitched as a celebration of UK creativity. It became known as the Festival of Brexit because it was conceived while the UK government was negotiating its withdrawal from the European Union and was timed to take place a few years after the UK left.

Originally commissioned by Teresa May's government in 2018, and since backed by current UK prime minister Boris Johnson, the event will receive £120 million of funding from the UK government.

Thirty teams consisting of scientists, artists, engineers, technologists and mathematicians from all over the UK were invited to come up with ideas for festival projects, with more than 500 people in total initially taking part.

Today, the ten teams chosen to take their designs into production for the 2022 festival were announced.

Among these are Assemble, the Turner Prize-winning London architecture studio, which is participating as part of the Assemble + 8 collective.

The collective also includes scientists and philosophers from the Universities of Sussex and Glasgow, Grammy-nominated Composer Jon Hopkins and a freelance team comprising a sound designer, digital producer and technologist and director.

Assemble + 8 will create an "immersive experience exploring the wonder of the human mind through architecture, neuroscience, technology, light and sound."

"Our main motivation for being involved is the opportunity to work with such an extraordinary group of collaborators, representing a range of disciplines outside our own," Jane Hall of Assemble told Dezeen. 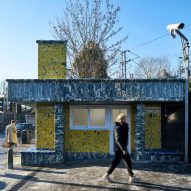 "Our project is hugely ambitious and will engage mass audiences across the UK and beyond,” the studio said.

French experience designer Ben Hayoun's collective will be behind "a cosmic adventure exploring immersive experiences, new technologies, science innovation, social media, youth culture and the power of imagination to change perspectives, dismantle boundaries and ignite the creative energy of towns across the UK."

As part of her project, Ben Hayoun has set up a hotline that the public can phone and ask her questions on, which is being livestreamed on March 24. This will be followed by a livestreamed conversation between the Ben Hayoun team and experts from the creative and scientific sectors.

"I see taking part in this as an opportunity and if you know my work, you will know that the way I function is to go within systems and change them from within," she told Dezeen when we called the hotline.

"The work I've been doing, whether it's at NASA or the United Nations or any other big scale institutions, I always work from within and, through the means of the event, modify it or change it for the long term." 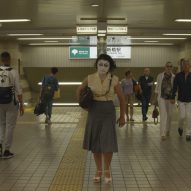 Taking part in the festival gives her an opportunity to work with the public on a larger scale, the designer explained.

"The program that me and my team are putting together really is about rethinking systems the way they are in this country and beyond, and then also going well beyond the kind of governmental politics," Ben Hayoun said.

"What we are talking about here is public service, it's working with the public for citizens, that's why I'm taking part in it. The scale is bigger so you can make more and hopefully have more of an impact as well."

Full details of the commissions are being kept secret but will be revealed later this year, when the festival will also announce its new name.

Projects will span from "the land, to the sea, to the air and even outer space, using pioneering technology and the power of imagination," according to a statement.

"We asked 500 of the best creative minds in the UK to tell us what a festival of creativity could be," chief creative officer for Festival UK* 2022, Martin Green, said.

"What they came up with has exceeded our expectations, and then some, which made deciding which 10 teams to commission very difficult. We believe the extraordinary breadth of talent, their thrilling ideas and geographic spread, will be ground-breaking, inspiring and exciting for millions of people across the UK and further afield."

The festival also named The British Council as its international partner for Festival UK* 2022.

Other teams taking part in the festival include Glasgow arts organisation Aproxima Arts, the Collective Cymru led by the National Theatre Wales, and Newsubstance Collective, which will create a physical manifestation of the British weather and celebration fo the UK coastline.

Ben Hayoun also took part in Dezeen's Virtual Design Festival last year, when she spoke about the relationship between sport and design.