Adelman is hosting an exhibition titled Afterglow at her New York showroom until 31 May 2017, as part of this year's NYCxDesign festival.

Lighting designs based on natural forms are accompanied by tropical-patterned beanbags by Print All Over Me and minimal rugs.

The brass sections are arranged into different shapes to create each of the lights in the collection. For example, the frame of the Cherry Bomb Radial Chandelier resembles spider's legs.

Long chains of silver metal drape from the linear structure of the sconce version named the Cherry Bomb Fringe Collection.

The designer intended the sculptural fixture to reference the waterfall paintings of American artist Pat Steir.

"This one is just extending the fringe from the ball, thinking about Pat Steir's Waterfall paintings," Adelman told Dezeen. "I just love the idea of going in between 2D and 3D and thinking about it for a wall covering, if you really went crazy with it."

"It's this sort of drippy thing on your wall that's in the decorative arts category where it's indulgent but then the system itself is quite rational so I love that," she continued.

Dense clusters of mould-blown bulbs, in both translucent and transparent glass, are attached to an aluminium frame – a "spine-like" structure made up of a series of joints, described by Zahn as "knuckles".

The fixture can be hung at different points to create various shapes, from arching standing lights to huge, long chandeliers.

"All these connections are all flexible and actually making the shape of the light will dictate this form," Zahn told Dezeen.

"You can make it as long as you want, with different shapes if you want it to," he continued. "It's been really fun adding lots of different hanging points. You can fill a whole space for sure."

Adelman is also displaying products by her protégé Mary Wallis, including the faceted, cocoon-like Empire chandelier modelled after a traditional Victorian lantern. The bevelled glass sides attach to a brass frame and are coloured in a misty white, which Wallis intended to be like parchment paper.

"The hand-rolled white glass has a kind of texture to it," Wallis told Dezeen. "I just wanted it to be really soft like parchment or rice paper."

Wallis, who has worked with Adelman since 2009, has opposed this enclosed form with the Edie chandelier, made up of sharp-edged bronze-coloured glass shards splayed out in different directions and lights nested in between.

"It is almost turned inside out and the glass now is expanding beyond the outline of the frame," she explained. "You think have to follow the line but you really don't and I think that's the interesting potential."

"Once I stopped chasing and just started drawing freehand I was really interested to see where this would go," Wallis said.

After founding her New York studio in 2006, Adelman has been a key figure in the city's burgeoning lighting design scene, having created pieces for Brooklyn brand Roll & Hill, and selling lighting designs through Nilufar Gallery and BDDW.

Afterglow will be on view in Adelman's private showroom at 1 Great Jones Street, until 31 May 2017. NYCxDesign runs from 3 to 24 May 2017, and also encompasses an all-female exhibition curated by Egg Collective, as well as a soft-toned installation that combines designs by Ladies & Gentlemen and SP01. 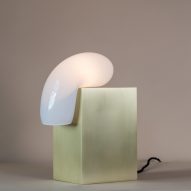