Spanish architecture studio Pauzarq uncovered the original concrete girders of this apartment in Bilbao to map its new broken-plan layout.

When reconfiguring the 100-square-metre apartment, the architects paid close attention to its original features. They uncovered its original concrete structure that was used to create a broken-plan layout of partition walls that follow the line of the girders.

The term "broken-plan" is used to describe a layout that might include snugs, studies and television rooms instead of large lounges. This type of home is becoming increasingly popular as residents seek more secluded spaces in their homes.

"On one hand, a powerful reinforced concrete structure with edged girders; on the other, a facade furnished with sash windows."

Their broken-plan solution saw the living room and bedrooms arranged along the apartment's front facade, while the bathroom, kitchen and dressing room were placed around its internal wall.

In the middle of the apartment, the kitchen, dining room and living room are grouped together to form a central hub.

Here, a U-shaped timber-framed glass partition wall wraps the kitchen with sliding doors that disappear into the walls on either side. The design allows the kitchen to be closed off, while still allowing light to penetrate into the kitchen space.

White-painted thermo-clay partition walls divide the rooms that line the apartment's front facade, while timber stud and plasterboard walls are used to separate the spaces that are arranged around the internal wall.

The apartment's original iron radiators and the floorboards have been integrated into the new design – the latter being extended with new floorboards into the dressing room, where the kitchen and bathroom were formerly located.

Where the lighter coloured new floorboards and darker coloured old floorboards meet, a stripy "transition area" has been created to soften the divide between the two different shades of wood.

Lighting has been integrated into the walls in order to accentuate the height of the apartment's ceilings. While lighting on the thermo-clay walls is directed downwards to highlight their rugged texture, lighting on the timber frame stud partitions shines upwards to emphasise its smooth surface.

Pauzarq has previously used slatted wooden screens to divide up a restaurant in Bilbao, and installed house-shaped, wood-lined archways for a concept store in San Sebastián. 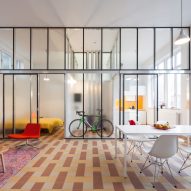