The Roof House is situated in a suburb of the Danish capital and was designed by Larsen for a family with two children, who wanted a house that could adapt as the children grow older.

The property was originally designed for a smaller plot, but its simple concept of a perimeter wall and a cluster of sloped roofs was easily expanded and altered when the family purchased a larger piece of land.

Influenced by the varying properties of the natural light available in the region, Larsen developed a proposal featuring a roof form that is broken up into multiple sections.

Each of the sloping surfaces incorporates a skylight, and gaps between the roofs create courtyards that ensure additional daylight is able to flood into the surrounding rooms.

"Indirect light has a beautiful cold blue colour that reminds you of the proximity to the ocean, while the low sun from south adds a warmer yellow light to the spectrum," said Larsen.

"The Roof House is designed to catch both indirect and direct sunlight at the same time, and turn it into an ever-changing experience when walking through the sequence of rooms."

The property's orthogonal plan is divided into a grid of 16 rectangles that help to compartmentalise the interior into different functional zones.

The entrance is accommodated at the end of a small courtyard flanked on either side by a workshop and a large annex, both of which are accessed from outside.

When the family's children reach their teenage years, one of them can move into the annex and will have their own independent entrance. A wall currently dividing this space into two rooms can be removed to create a single larger room.

Inside the main house, the bedrooms and bathrooms are arranged on both sides of the front door, with the remaining space containing the lounge, kitchen and dining areas.

The juxtaposition of the various roof sections is particularly evident in the main communal space, where skylights illuminate some of the slanted surfaces.

The room occupied by the parents is lined on one side by sliding glass doors that open onto a southwest-facing terrace, which can also be accessed from the living space.

On the opposite side of the building, a southeast-facing deck adjoining the kitchen catches the morning sun. An existing tree emerges from a circular hole cut into the wooden floor.

Larsen designed several pieces of custom-made furniture for the property, including a wall-mounted modular shelving unit based on a concept model created during the design phase of the house. 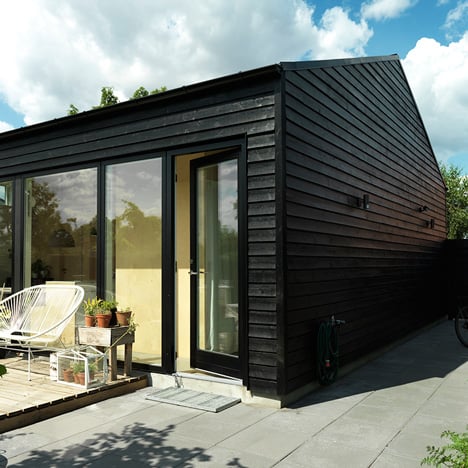