This pared-back holiday home on the Swedish island of Gotland provides a retreat for three generations of a family and was designed by Tham & Videgård Arkitekter.

The Stockholm studio – arguably best known for its mirrored Treehotel – designed Atrium House on the coast of the island, which is surrounded by the Baltic Sea.

As the name suggests, the house is arranged around a central atrium, which creates a sheltered outdoor space in lieu of a traditional garden. Instead, the land surrounding the outskirts of the house is used to graze sheep.

Minimalist interiors with bare rafters, integrated furniture and mottled walls place emphasis on the views out through the large sliding windows. The architects used these large expanses of glazing with the aim of giving each room the feeling of a "niche-like shelter in the open space of the landscape".

Hung onto the similarly mottled walls of the building's exterior, the windows are intended to reference the type of openings usually found in barns.

"The large sliding glass windows are mounted on the surface of the exterior walls, according to the same principle as many barn doors," explained Tham & Videgård, which completed the project in 2010. "Also the interior doors are surface-mounted, allowing the walls to appear unbroken."

Rooms are set over a single level to allow the house to keep a low profile, and its exterior is rendered in black plaster. Oak doors and window frames have been treated with tar oil to match the dark facades, while metal elements are made from oxidised zinc.

"It is built on a slight ridge that marks the former location of the coastline a thousand years ago. In relation to the open and expansive landscape, the building seems more like a low wall than a house," said the studio.

"Inspired by the impressive materiality of Gotland's vernacular agricultural architecture, the masonry construction has a natural plaster colour that has been mixed with carbon black," it added.

A flat roof spans the simple rectilinear building, but the floor rises and falls in tune with the ground below to create level changes throughout the plan.

"This means the height of the ceiling varies within the main spaces, which are arranged in a continuous ring around the atrium," explained the architects. "Within this continuous space, the smaller rooms are assembled in a number of solid blocks."

Tham & Videgård Arkitekter, which came in at number 311 on the Dezeen Hot List, was founded by Bolle Tham and Martin Videgård.

Among the practice's latest projects is a pair of apartment blocks featuring scalloped openings. It also drew up designed for Sweden's "statistically most sought after home" – a mash-up of the nation's traditional red-painted timber cottages and a functional box. 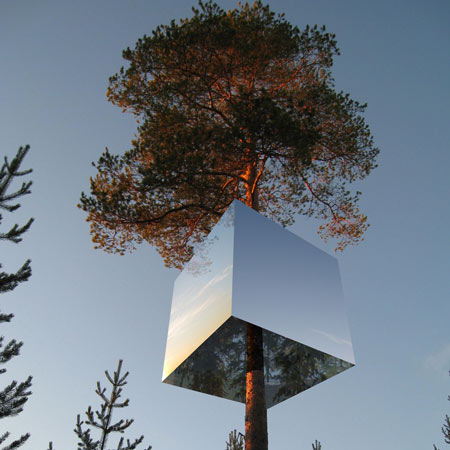