Southwark Town Hall in south London has been renovated and repurposed to accommodate student housing and a mixed-use arts hub, including a theatre contained in a folded tile-clad extension.

Architecture and interior design firm Jestico + Whiles was appointed by student-housing developer Alumno Developments to oversee the renewal of the historic building on Peckham Road, which Southwark Council insisted should continue to benefit the local community.

The former town hall – which was built in 1872 and extended in the 1930s – was in use for almost 150 years before its sale to the University of the Arts London when Southwark Council moved their offices to Tooley Street.

"Our proposal for the town gall took a fresh approach which respected the history and character of existing buildings, but aimed to mark a new phase of history for this important site within the local community," said Alumno's managing director David Campbell.

The refurbished building contains 166 rooms for students of Goldsmiths College, as well as communal areas including common rooms, lounges and private gardens.

Accommodation was created by refurbishing the town hall's existing rooms and adding an extension clad in pale brick to the rear of the building.

Further community centred facilities in the original building include 12 self-contained artists' studios, which are supported by an independently managed public gallery space and a cafe.

The new gallery is positioned on the top floor to provide views of the London skyline from its full-height windows and large terrace.

The cafe is situated at street level next to the main student entrance to optimise opportunities for attracting passing trade.

"The residential extension complements the hall's Portland stone and weathered brick, in a pale brick which ties the new and historic together," Jestico + Whiles told Dezeen.

The new addition is wrapped in a folded facade clad in iridescent tiles that create subtly shifting reflections when viewed from different angles and at different times of day.

"The complex geometry of the folded skin is based on the theatre curtain, gathered at the head with hanging pleats," the architects added.

A glazed foyer and breakout area accessible from a new public square at the rear of the building are intended to enhance the relationship between the theatre and the community. 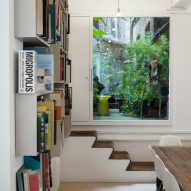 Jestico + Whiles previously completed a house for one of its directors featuring dark-stained cedar gable and knapped-flint walls, and its studio was one of 18 architecture offices photographed as part of a project by Marc Goodwin.